The Swedish driver is competing in his first season of RallyX Nordic Supercar competition and is already turning heads at the wheel of his Renault Clio, culminating in a landmark performance in Norway that yielded a fifth place result in the intermediate classification and a run to fourth in the final.

Even so, simply getting the car running quickly and reliably in time for the opening round in Holjes represents the greatest highlight for Carlsson so far this season. 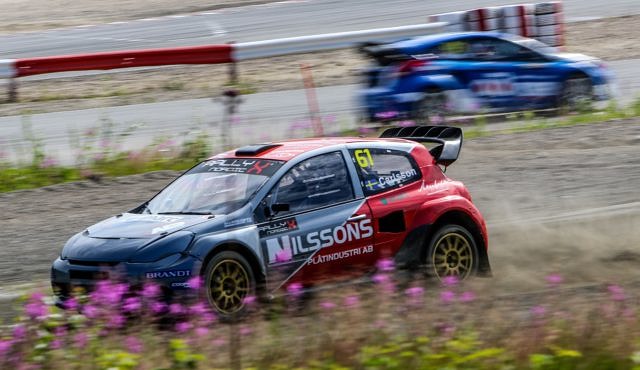 “My friends, family and I built the car from scratch over the winter and autumn. We barely got it done before Holjes, so free practice was actually the first time I had driven a Supercar.

“That was an amazing feeling and I never thought I would keep up with the other drivers so quickly. We drove the whole event without any big problems, even though we hadn’t done any testing with the car before the race. I can say I’m very proud and amazed by the whole team!”

Learning more about the Clio each time he gets behind the wheel, Carlsson is targeting the podium during the second-half of the season.

“Everything is still very new to me and the team so my target for the rest of the season is to improve both myself and the car, as well as learn as much as possible. We will see what the results will be, but it’d be fun to be on the podium in some of the last three races.”

Round 4 of the 2018 RallyX Nordic season takes place on 10-11 August at Nysum – Purchase your tickets HERE.