The 2019 RallyX on Ice presented by Cooper Tires festival will see some of motorsport’s fastest and most fearless drivers go wheel-to-wheel for winter glory on Sweden’s frozen Lake Åre (18-23 March) – here are all the key timings.

Taking the format of a three-stage series, the racing action will take place on Monday (18 March), Wednesday (20 March) and Saturday (23 March). Each day will feature a different track layout – including a high-speed oval – with spectators encouraged to enjoy the high-quality racing free of charge amongst the excellent local facilities on offer. 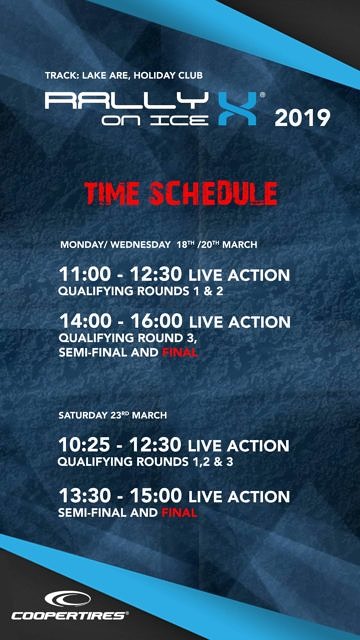 Each race day will comprise three qualifying rounds, two semi-finals and the all-important final for both the headlining Supercar Lites class and the supporting CrossCar category. The competitive action will begin at 11h00 local time on Monday and Wednesday, and at 10h25 on Saturday, with the ‘business end’ of proceedings – the semi-finals and final – taking place each afternoon.

Those unable to attend can follow the excitement via a combination of social media and television broadcasts, details of which will be announced soon.