Pontus Tidemand will add to the star names contesting the 2019 edition of RallyX on Ice presented by Cooper Tires on Sweden’s frozen Lake Åre next week (18-23 March), after signing up to compete in the winter sport festival with front-running team JC Raceteknik.

One of the leading lights in both rallycross and rallying circles, Tidemand boasts a success-studded career CV. The 2013 Junior WRC Champion and 2017 WRC2 title-winner has 35 starts to his name in international rallying’s top flight, the FIA World Rally Championship, most recently finishing eighth for M-Sport in last month’s Rally Sweden – and his rallycross résumé is no less impressive.

The 28-year-old ran a part-season in the FIA World Rallycross Championship with EKS RX in 2014, with three final appearances from seven starts yielding eighth position in the overall standings. He dovetailed that with an assault on the Euro RX laurels, placing third in the title chase despite missing the Lydden Hill curtain-raiser. 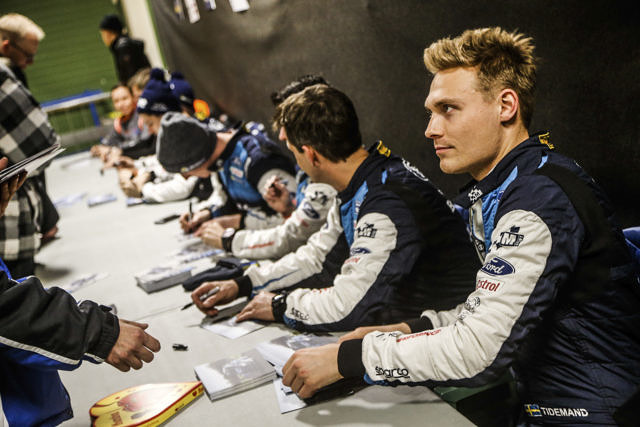 Now, the Swede is back – and while he insists his RallyX on Ice appearance will be just for ‘fun’, it is clear that he is champing at the bit to get out on-track.

“Next week will be great fun!” Tidemand enthused. “When Joel [Christofferson – JC Raceteknik Team Principal] asked if I was interested in being a guest driver at RallyX on Ice, I didn’t need asking twice.

“There will be intense competition from many established drivers, so I have no expectations in terms of results, but at the same time, I also know that when the helmet goes on, the competitive spirit builds. Ultimately, I see this as being a bit of fun alongside my rallying programme. Thank you so much to JC Raceteknik and Helmia for giving me this chance.”

“To have such a well-qualified driver as Pontus competing for us in Åre is fantastic,” added Christofferson. “We know he is a good driver, and it will be an exciting week. We believe that he can contribute to our other drivers with his level of experience, and that they can help him settle into the Supercar Lites car quickly. It’ll be fun for all of us.”