JC Raceteknik CrossCar driver Isak Reiersen admits it was ‘amazing’ to race to his maiden RallyX Nordic victory in only his third start at Nysum earlier this month – as his team boss predicted more silverware to come from the teenager in 2019.

Reiersen had to overcome technical issues in the qualifying heats in Denmark to take an impressive win in the final, 1.6 seconds ahead of his nearest rival. Standing on the top step of the podium propelled the 15-year-old to third place in the CrossCar standings – and confirmed him as a championship contender.

“It’s the first year for me in CrossCar, I’m still young and it’s a tough starting field with many experienced drivers. Despite that, I managed to win, which felt amazing,” he enthused. “We have struggled with technical problems from the beginning of the season, and even at Nysum we had problems with the driveshafts, but during the weekend we gave everything we had and the mechanics did an incredible job. 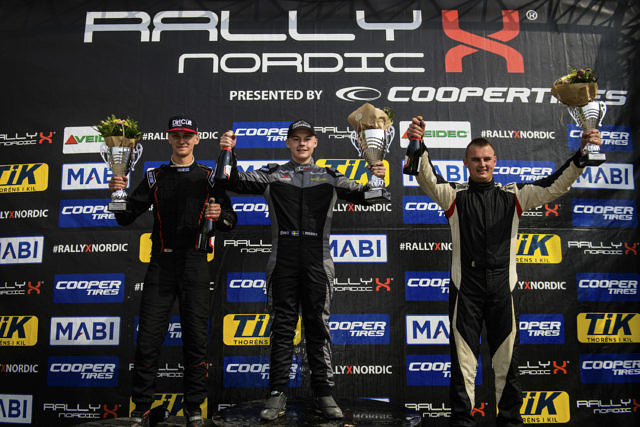 “I have always known that the speed can be good when everything works, but now we have been able to show it. In both the semi-finals and the final we found the right set-up and I could run at my own pace without taking any risks. I must say a big ‘thank you’ to all the sponsors, my mechanics, my spotter, everyone who supports me and the whole JC Raceteknik team – they are the people who make this possible.”

Reiersen struggled with an array of reliability problems in the Höljes curtain-raiser. The Swede didn’t make the cut for Saturday’s final in Sweden but bounced back to take fifth overall on the Sunday, but his troubles in the season-opener only served to make his breakthrough win at Nysum all the more special.

“It was really nice for Isak to take this win. He has had an extremely tough start to the season with driveshaft problems, but has shown that when everything is working he is at the top,” commented JC Raceteknik Team Principal Joel Christoffersson.

Reiersen will carry his building momentum through to round four in Latvia (20-21 July) as he chases fellow Swedes, points leader Nils Andersson and second-placed man Jimmie Österberg.