Olsbergs MSE’s Ulrik Linnemann has demonstrated impressive pace in all three rounds of the RallyX Nordic presented by Cooper Tires campaign thus far in 2019, only to be impeded by bad luck and numerous issues in the semi-finals. Linnemann won heats on each day of the Höljes double-header and also took a heat victory in front of his home crowd in Denmark.

Despite the obvious speed Linnemann is able to extract from the Honda Civic, he has been unable to convert it and take a well-deserved place in the final. His efforts in Höljes were curtailed by a slow getaway in one semi-final and a tyre crying enough in the other, while his march to a home soil final appearance was halted by steering trouble at the Nysumbanen circuit.

“I have shown that I am really fast and consistent in the Honda Civic, I had P2, P3 and P3 in the intermediates and two heat wins in Sweden but I have been really unlucky in the semis,” the Danish driver commented. “I was quickest in Q2 for round one at Höljes but got a puncture in the semi-final, again on day two I was fast but we stalled at the start of the semi, and at Nysum, I had broken steering which gave us a DNF.” 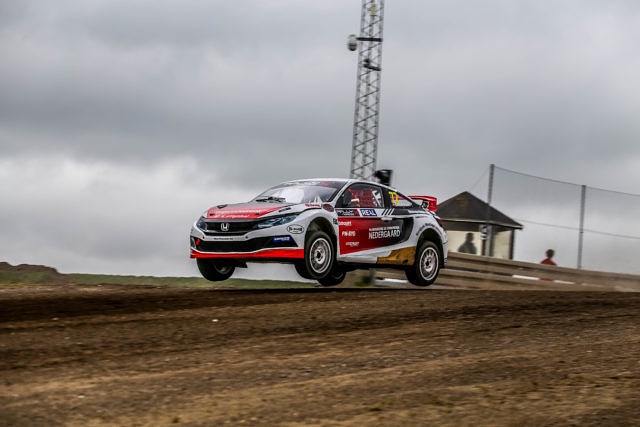 Linnemann currently sits fifth in the overall standings – thanks to his results in the qualifying heats – just 22 points behind championship leader and OMSE team-mate Oliver Eriksson. The Dane looks on to Latvia hoping that his luck will take a turn for the better.

“I raced at Biķernieki last year in European RX, where I felt I didn’t have enough power in the VW Polo I was driving,” he said. “I’m looking forward to driving there with the Honda Civic that is starting to show its potential, so we’re fully focussed on getting that double Honda podium soon!”