Linus Östlund has endured a season of contrasting fortunes in the opening three races of his 2019 RallyX Nordic campaign, his efforts were hampered by gear linkage issues at the opening round of the year at Höljes. However, the Olsbergs MSE driver quickly bounced back the following day and finished second in round two, revelling in the opportunity to stand on the rostrum and spray champagne at his home track.

Round three at Nysum also saw Linus make a spectacular comeback, lighting up the timesheets after retiring from Q1 and going on to win his semi-final. In the final, the Swede chased eventual winner Ben-Philip Gundersen all the way to the flag crossing the line in the runner-up spot and claiming his second podium in as many races.

“We have had a really mixed year so far, we have shown strong pace at Nysum and Höljes but had a lot of bad luck with the car and a DNF in the first race,” reflected Linus. “The two podiums were definitely the highlights but I think we were fast enough to win in both races. 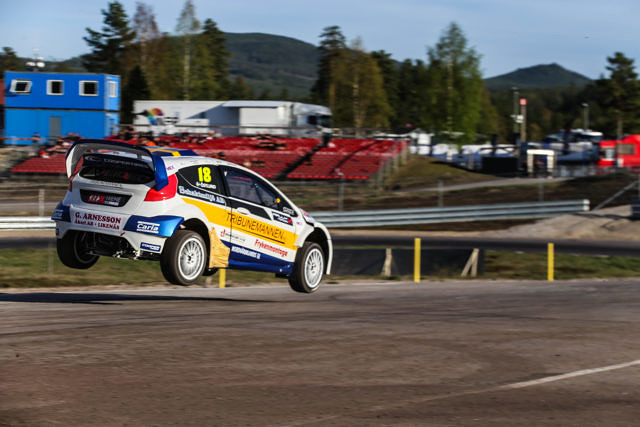 “Despite the bad luck we have been very consistent with second and third place in two races, and of course that is good news for the championship. We are third in the overall standings and only two points behind Sondre Evjen and nine behind Ben-Philip Gundersen so I think we are definitely in the championship fight.

“I’ve never raced in Latvia before in the Supercar Lites, the track looks fun but I think it will be a challenge for all of the drivers!”

Östlund heads to Latvia with 66 points on the scoreboard, and with four races yet to be run, everything is still to play for in the Supercar Lites category. Having never previously raced at the Biķernieki circuit, he will be gunning for victory as RallyX Nordic gets ready to race in Latvia.