Larsson in the championship hunt after ‘perfect’ Latvia round

RallyX Nordic presented by Cooper Tires got back underway last weekend (20/21 July) at the historic Biķernieki track in Riga, Latvia. After a long break, the drivers were keen to resume racing, none more so than eventual winner, Robin Larsson who revelled in his first victory of the 2019 season.

The hair-raising Biķernieki circuit is sensational to drive, but also extremely unforgiving in nature. Much of the track limits are defined by barriers meaning any mistake, no matter how small, will not go unpunished. Additionally, the track features a unique double jump section with the joker and main lap running alongside one another to create breathtaking last corner battles.

Latvian drivers were well-represented in Riga, with a home crowd favourite making an appearance in three of the four classes in the shape of Vasiliy Gryazin in Supercar Lites, Roberts Vitols in the RX Academy and Ronalds Baldins in CrossCar. Several drivers also ended up on their roofs over the course of the day, with Turn Two becoming notoriously tricky to negotiate as Simon Olofsson and Stene Johansen found out – both turned on their heads.

Robin Larsson sealed his first 2019 Nordic win after a dominant display in the preliminary races – the only front-runner to enjoy an uninterrupted run through the qualifying stages. A close battle with Philip Gehrman in Q1 and a dice with Oliver Eriksson in the first semi-final were the only blips on Larsson’s radar on his way to a glorious victory in the Latvian sunshine. The JC Raceteknik driver’s championship challenge received a boost, seeing him close to within five points of the lead.

“It’s nice to finally have a good weekend in RallyX Nordic,” enthused the Swede. “It was the perfect weekend aside from Q1. We had the pace all weekend and the car worked perfectly in the final. 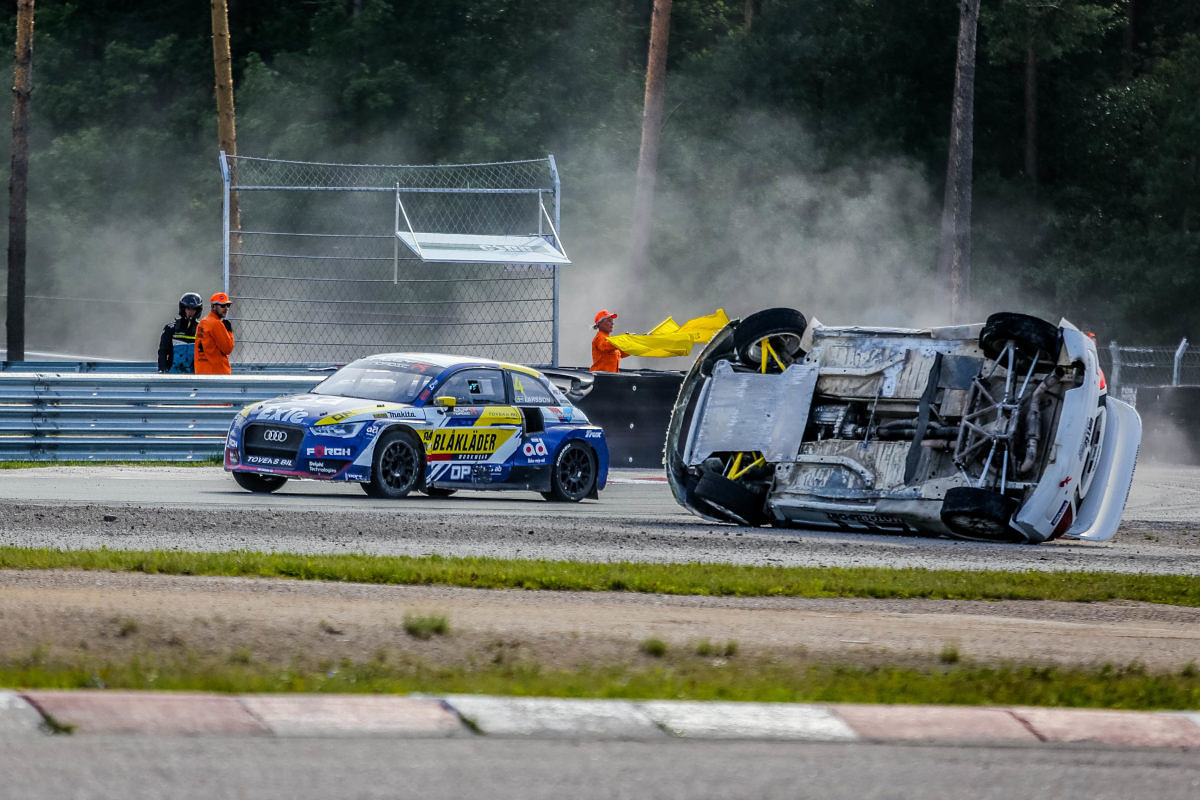 “We’ve struggled so far this season in Nordic, but we’re going to keep hunting and the fight is on for the championship.”

Fast Finn Jere Kalliokoski slipped under the radar for much of the qualification stages, but his results nonetheless set him up nicely for a semi-final win and second overall in the final. Consistency is key for Kalliokoski, both last weekend and in the championship as three podiums have helped him climb to second place in the standings.

Championship leader Eriksson’s weekend was not as straightforward as it had been in Denmark. The Olsbergs MSE driver hit trouble in Q1, making contact with team-mate Ulrik Linnemann at the first corner and then stalling on the start-line in Q2. Eriksson produced an excellent recovery effort to finish second in his semi-final after a close battle with Larsson, ultimately missing out on the runner-up spot in the final by just six tenths-of-a-second.

Linnemann suffered another difficult weekend after the contact with Eriksson in Q1 and a time penalty for hitting a track marker in Q2 put him at a disadvantage for the finals – fourth overall was the end result for the Dane.

JC Raceteknik’s Ben-Philip Gundersen was the architect of another dominant display following on from his victory in Denmark. The Norwegian had things under control right from the off on Sunday, going fastest in every session on the way to the top step of the rostrum.

“What a wonderful weekend,” Gundersen commented. “I didn’t expect this after practice so I’m very, very happy. I had to push all the time for the win; I knew the other guys were fast so had to keep going, but I had a great feeling in the car.” 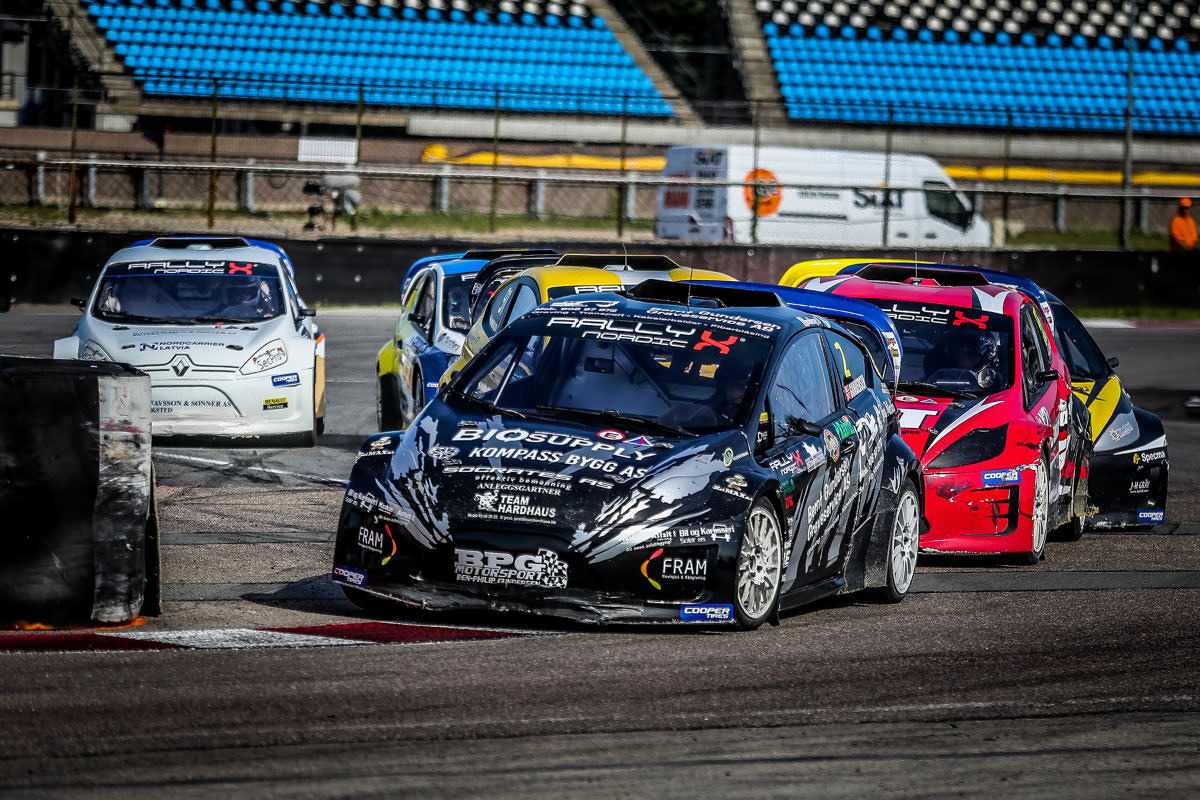 Linus Östlund claimed the runner-up spot in the final after a consistent run in the qualifying stages catapulted the Swede up the order.

Local man Vasiliy Gryazin was the only driver other than Gundersen to top the timesheets – in Q1 – but even he didn’t have an answer once the championship leader settled into his stride. Third was the eventual result for the Sports Racing Technologies star, who was thrilled to finish on the podium in front of his home crowd.

Rasmus Tuominen mirrored his form from the previous round at Nysum by going fastest in all-bar one session. The Finn didn’t have it all his own way, however, as local favourite Roberts Vitols was never too far behind and chased him all the way to the final flag. Luka Nurmi also had a strong showing in Riga and eventually stood on the third step of the podium.

The last of the three Latvian drivers in the field featured in the CrossCar category and gave the crowd the biggest reason to celebrate, as Ronalds Baldins took an immensely popular victory on home soil ahead of championship leader Nils Andersson who, in turn, was followed home by Timmy Enlund. Isak Riersen looked set to dominate the category before electrical issues forced him out at the semi-final stage.

Next up, the lights go green in Norway just one week after the chequered flag fell in Latvia, as Finnskogbanen signals part two of a fantastic RallyX Nordic double-header. Round five of the 2019 championship will take place on 27/28 July.