Two-time FIA World Rallycross Champion Johan Kristoffersson is the first big name to officially commit to next month’s ground-breaking ‘All-Star’ Magic Weekend at Höljes (2-5 July), and the Swede is hopeful fans will show their support by tuning into the action ‘from a safe distance’.

Kristoffersson dominated World RX in 2017 and 2018, racing to 18 wins from 24 starts for PSRX Volkswagen Sweden – including back-to-back triumphs on home soil at Höljes – and firmly establishing himself as the benchmark at the pinnacle of the sport.

Following a sabbatical season in the FIA World Touring Car Cup last year – in which he finished fifth overall, with three victories to his credit – the 31-year-old is returning to rallycross in 2020. Notwithstanding a cameo appearance during Olsbergs MSE’s livestreamed race day simulation at Höljes last month, the ‘All-Star’ Magic Weekend will mark his first competitive outing in the discipline in more than a year-and-a-half.

Kristoffersson will contest the event’s Supercar class behind the wheel of the Volkswagen Polo campaigned by Sondre Evjen in the FIA European Rallycross Championship in 2019, under the Volkswagen Dealer Team Bauhaus banner.

The joint brainchild of RallyX Nordic promoter RX Promotion, Höljes’ organising club Finnskoga MK and the Swedish arm of international broadcasting heavyweight NEP, the ‘All-Star’ Magic Weekend is set to re-write the way in which international motorsport events are staged.

With ‘closed doors’ a necessity in the current climate, the livestreamed event will follow a purely digital, pay-per-view model to adhere to current COVID-19 restrictions – with the promise to bring more rallycross action, highlights and exclusive ‘insider’ content than ever before to fans all around the world.

Part of the proceeds of this crowdfunding initiative will go towards safeguarding Höljes’ future, and Kristoffersson is a big fan of the format. What’s more, with exactly one month to go until the ‘All-Star’ Magic Weekend gets underway, he is clearly looking forward to taking to the track in anger again – as well as to finding out who his rivals will be… 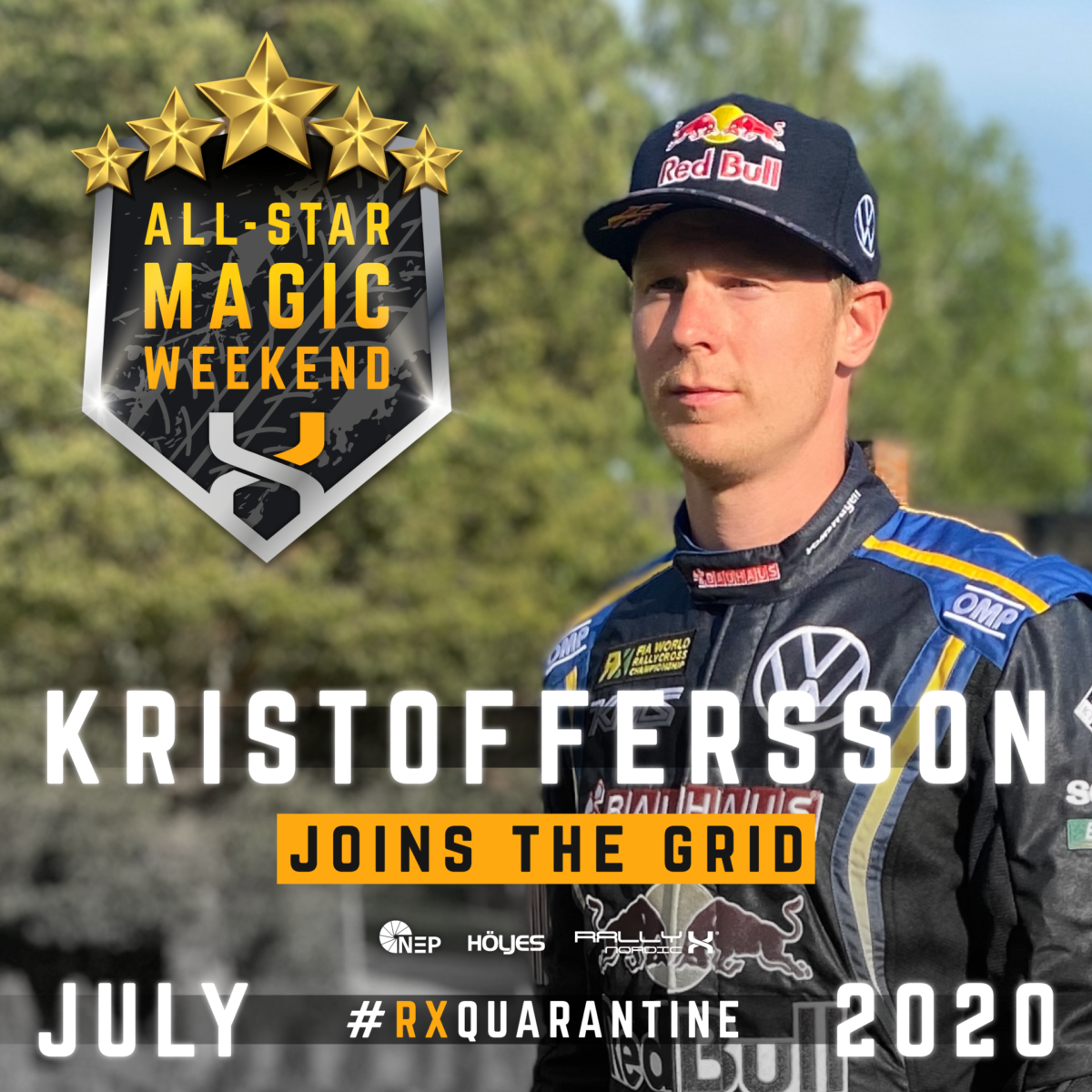 “First of all, I must pay tribute to the fantastic job done by the entire organising team to bring this event to life, which cannot have been an easy task in the current circumstances,” he remarked. “We clearly have to do things differently in 2020, and now more than ever, we need everybody – fans, teams and all the people involved in our great sport – to pull in the same direction. One person cannot do everything, but as individuals, we can all play our part.

“It will be a different kind of Magic Weekend this year, but the most important thing is that there still is a Magic Weekend, because for a long time that looked very doubtful. I know how hungry all the fans are for some real live motorsport action, and I think and hope that everybody will appreciate the great effort that has gone in simply to put this event together.

“Health obviously comes first, but after that, we all want to go racing again and now, finally, we can do that. I didn’t seem to be too rusty when I drove the Lites car last month, and the day left me with such a big grin on my face. It was awesome to feel the nerves, the pulse, the heartbeat and the adrenaline rush while sitting there on the start-line again, so now I’m super excited to climb back into a Supercar for the first time since 2018. For me, it’s one of the absolute best cars to drive in the world.

“I know the identities of some of the other guys the event organisers are speaking to, and as a naturally competitive person, I’m constantly looking to measure myself against my peers and see where I am, so it would certainly be cool if some of my fellow World Championship drivers came along too… Can you imagine that?!”

Kristoffersson had a message, finally, for all the fans who might be feeling disappointed not to be able to attend trackside, assuring them that the best thing they can do to show their support for Höljes right now is to stay home and stay safe.

“I know NEP will work hard to create the most exciting show possible for everybody watching the live broadcast, and hopefully we can reach some new audiences, too,” he said. “The bottom line is that if we want there to be more Magic Weekends in the future, now is the time to really get behind Höljes – and the best way to do that at the moment is by tuning in from a safe distance. It’s going to be epic!”

More information about the ‘All-Star’ Magic Weekend and further driver announcements will be made over the coming days and weeks. The final entry lists for all four classes – Supercar, Supercar Lites, CrossCar/Crosskart and CrossCar Junior – will be published after the closing date of 18 June.