There is a phrase in English that goes, ‘Anything you can do, I can do better’. We’re not quite sure what the Finnish equivalent is, but we suspect Niclas Grönholm may have uttered it to his father Marcus before going out and blitzing the two-time FIA World Rally Champion’s times on another sensational day of action at Höljes today (4 July).

There was much amusement in the ‘All-Star’ Magic Weekend paddock yesterday evening after Marcus Grönholm – competing in a rallycross Supercar for the first time in eight years in the ‘Legends’ class – posted the quickest race time of the event so far, outpacing all of the current Supercar protagonists, including his Thursday pace-setting son.

The livestream cameras captured Niclas’ priceless reaction – as well as those of Johan Kristoffersson, Oliver Solberg and Kevin Eriksson – when reality dawned that he had just been beaten by his 52-year-old father in the same car (to see the reaction again, click here), but it clearly fired him up to go even faster and today, nobody could stop him.

Piloting the GRX Taneco Hyundai i20 with which he will contest the FIA World Rallycross Championship, Grönholm Jnr lowered Grönholm Snr’s benchmark in Q1 – despite receiving a hefty hit at the first corner – before putting on a scintillating show in Q2 to go even faster again and maintain the family’s flawless qualifying record this weekend. 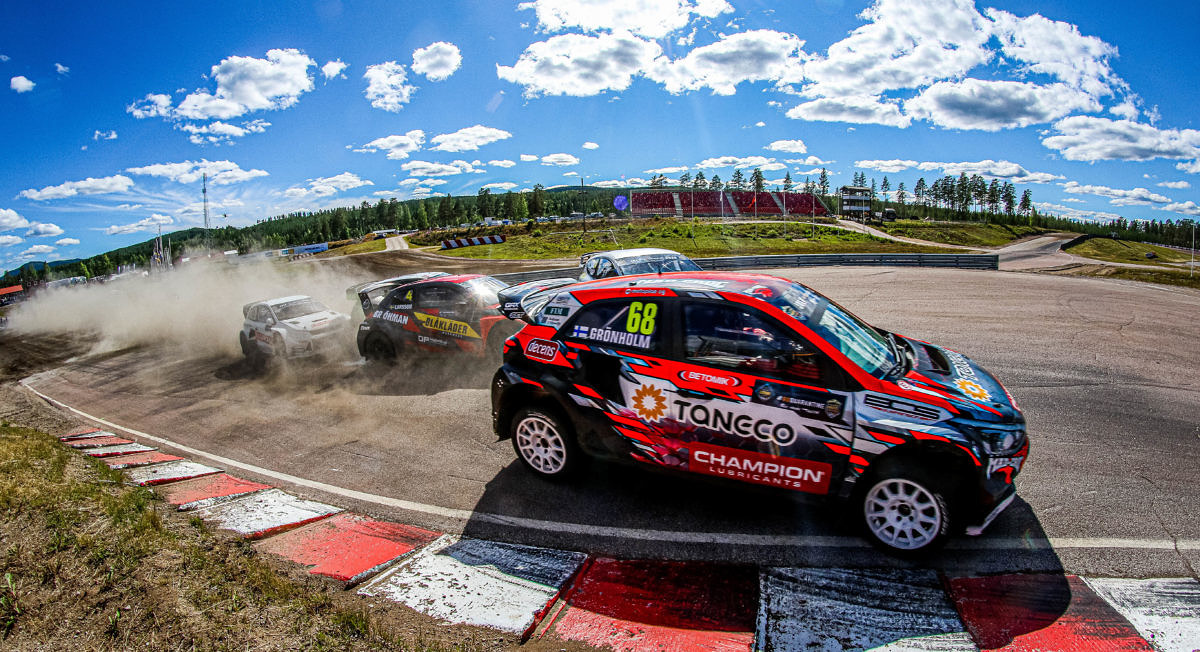 Former RallyX Nordic presented by Cooper Tires Champion Thomas Bryntesson produced another impressive effort to go fourth overall, with Lukas Walfridson a strong fifth and Oliver Eriksson enjoying a much better time of it than two days ago in sixth. The reigning RX2 Series Champion brilliantly controlled a brace of half-spins following a Turn One tangle in Q2, then saved another wild moment after ricocheting off the barrier onto the grass coming down the hill a few corners later.

Olsbergs MSE team-mate Fraser McConnell was the architect of a stunning pass on Walfridson in Q2 but lost time with a broken wishbone after clouting a kerb, while hard-luck stories could be told by Oliver Solberg – slowed by a puncture in Q2 – Pontus Tidemand with engine issues and Ben-Philip Gundersen, whose ill-fortune continued on his Supercar debut.

Ultra-fast since the beginning of the event, this time, the Norwegian’s driveshaft broke in Q1, before he found himself tagged at the first corner of Q2 and sent into a lurid slide over the grass. His assailant Linus Westman was subsequently disqualified.

In Supercar Lites, Jesse Kallio immediately sought to banish his bad luck from Thursday – when he suffered a gearshift issue in Q3 and wheel bearing failure in the semi-final after dominating the opening two qualifiers – and duly showed his pursuers a clean pair of wheels in both Q1 and Q2 to top the intermediate standings.

Mats Oskarsson displayed a solid turn-of-speed all day to place sixth, with Jimmie Walfridson (JC Raceteknik), Marcus Höglund, Niklas Aneklev – pinched into a Turn One spin in Q2 after an excellent Q1 result – and Thomas Holmen completing the provisional top ten. The Norwegian produced a particularly feisty showing in Q2 as he fought his way to the front of the field in an audience-pleasing performance.

In the supporting CrossCar/Crosskart class, Patrik Hallberg leads the way, while Thursday winner Oskar Andersson endured a day to forget as his car caught fire in Q1, ruling him out of both races. Five-time FIA World Rally Championship runner-up Thierry Neuville was also out-of-luck as he broke down with a loss of power in Q1. Alex Gustafsson took a clean sweep in the CrossCar Junior category as he seeks to repeat his Thursday victory.

The action concludes tomorrow with Q3, Q4, semi-finals and finals for all classes and the semi-final and final in the ‘Legends’ category. You can tune in by subscribing to the global livestream right here.