At 43, he might be the elder statesman of RallyX Nordic presented by Cooper Tires’ Supercar Lites class, but Mats Oskarsson proved that age is no barrier to success at the ‘All-Star’ Magic Weekend (2-5 July) by battling his way to a superb second-place finish in Sunday’s final.

Oskarsson was on the pace all weekend on home soil, posting top six times in four of the seven qualifying sessions and never placing outside of the top ten in a field of predominantly young hotshots. He missed out on a spot in the final on Thursday by barely a second, but he more than made up for that disappointment in treacherous conditions three days later.

Reaching the semi-final once again, the Swede put in a spectacular performance, spinning while trying to pass Jimmie Walfridson before engaging in a tremendously entertaining wheel-to-wheel duel with fellow countryman Niklas Aneklev.

A track limits penalty for Walfridson elevated Oskarsson into the final, and from the back of the grid, he went on a charge. Forced into the joker on the opening lap, he proceeded to hunt down and overhaul his younger rivals one-by-one as they served their own jokers. Taking the chequered flag ahead of local hero Linus Östlund, highly-rated rallycross returnee Henrik Krogstad, round one winner Simon Olofsson and 2019 Höljes winner Thomas Holmen, he matched his best finish in RallyX Nordic to-date.

Not only that, but the Malung native achieved the result without the benefit of a spotter, meaning he had to judge the gaps ahead and behind by himself. His last lap was the fastest of the entire race, and he left Höljes sitting fifth in the championship standings as he targets a full season in the popular Scandinavian series. 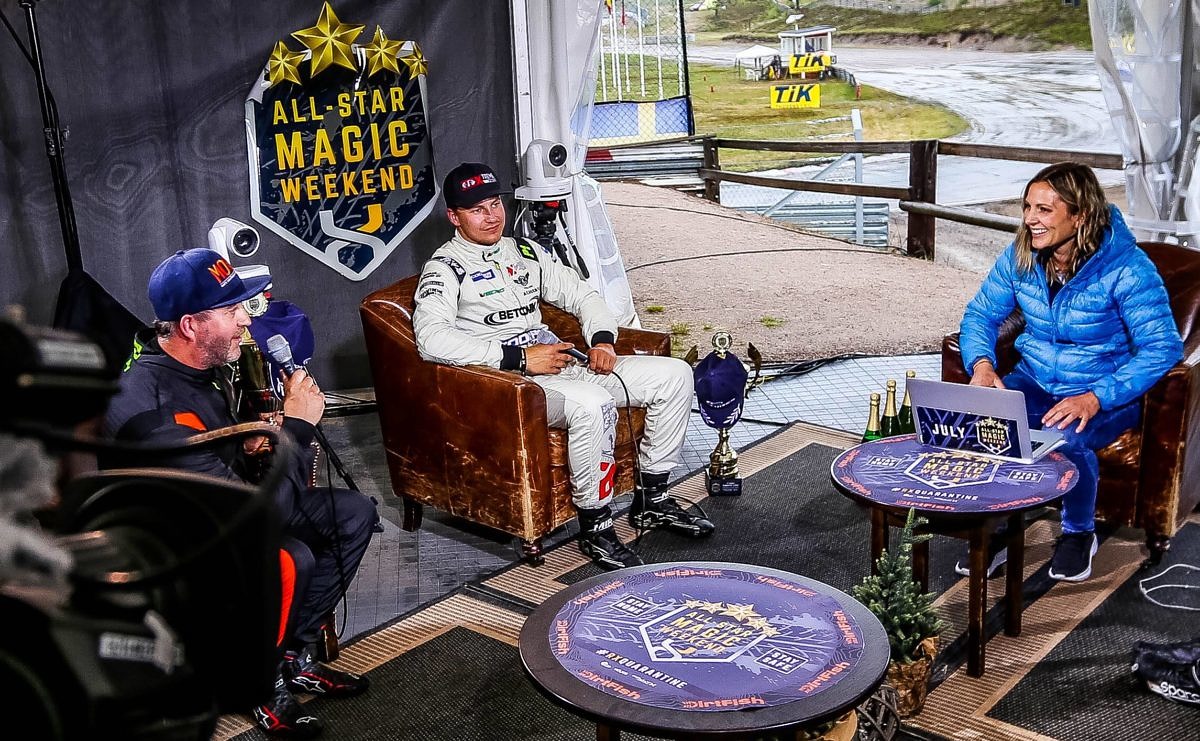 “I’m very pleased with how the weekend went,” Oskarsson reflected. “Going into it, I didn’t really have any expectations as such but I was hoping to reach the final in at least one of the rounds – and obviously, we managed to do a bit better than that…

“It was probably the toughest field I’ve ever faced in Supercar Lites – in free practice on Saturday, there were 12 cars covered by scarcely eight tenths-of-a-second, which is incredibly tight. There were a lot of very quick young drivers in the field, but hopefully I showed that age is just a number.

“We were quick throughout, and I was a bit mad with myself on Thursday because I had more pace than Jimmie [Walfridson] in the semi-final but couldn’t quite get past him, as much as I tried. In Sunday’s semi-final, I went back-and-forth with Aneklev a few times, and I knew Jimmie had a penalty coming so I didn’t try to overtake.

“I’ve shown in the past that I can be pretty fast in the wet, and I have a lot of confidence in those conditions so I felt hopeful sitting on the grid ahead of the final, but equally, I knew I was up against a lot of very strong drivers.

“I had three cars on my left going into Turn Two at the start, so I couldn’t take the standard lap and had to go to the joker immediately. As things transpired, that worked out perfectly. Without a spotter, I didn’t know where I was in relation to anybody else, but when [Thomas] Holmen and [Simon] Olofsson both emerged from their own jokers behind me, I began to think, ‘I might just have a chance here’.

“After getting ahead of Linus [Östlund] and [Henrik] Krogstad for second on the last lap, I must admit, my emotions were a bit all over the place and I had to try to calm myself down! It felt like I was in a dream. At Finnskogbanen last year, I inherited the position to a certain extent, but this time, there was no luck involved and I really had to fight for it. That meant a lot.”