Patrik Hallberg may not have won either of the CrossCar finals at Höljes’ ‘All-Star’ Magic Weekend earlier this month, but he certainly made his mark on the class over the course of a stunning RallyX Nordic presented by Cooper Tires debut.

Hallberg spent 2019 contesting the 125cc Crosskart category in the Swedish Championship – securing a clean sweep of four victories from as many starts – while placing third in the NEZ (North European Zone) series. Astonishingly, he won more than half of the races he entered last year, but still, arriving at Höljes for the high-profile RallyX Nordic season curtain-raiser, he was a newcomer in the Xtreme class and, consequently, something of an unknown.

It did not take long for the 16-year-old to state his credentials, as he immediately set the pace in the 40-strong field in Wednesday evening’s opening free practice session. He went on to post the fastest time in five of the seven qualifiers – on occasion, by as much as four seconds – and reached Thursday’s final following a commanding semi-final success.

Rocketing between the front row starters at lights-out in the final, he looked to be on-track for a sensational triumph first time out only to spin the lead away with two laps remaining, restricting him to fifth at the chequered flag.

Undeterred, in round two, Hallberg again showcased his scintillating raw speed from the outset, lapping an extraordinary 14th-quickest in the mixed free practice session – faster than seven of the 600bhp Supercars – and going on to top the intermediate CrossCar standings.

Unfortunately, his challenge ended in the semi-final after a stall at the start left him with too much work to do, but as he left Höljes sitting a strong third in the title table, the Tungelsta-based teenager had unquestionably served notice of his intent for the remainder of the campaign.

“It was a fantastic weekend!” enthused Hallberg, who is a member of Sweden’s Motorsport Junior Team. “I arrived as a rookie in the class – I had only driven the CrossCar twice before – and I didn’t know how good my speed would be compared to the rest of the field, but from the first practice session I could see I was fast and after that it just got better!

“That’s where I adopted the mindset that I could make the final, and I’m very proud of all the qualifying wins I achieved. I got really good starts in the dry the whole weekend and I think that was the key – to get a clean race with no traffic and just pull out a gap over the field.

“The start in Thursday’s final was unbelievable. I was planning to go for the joker on the first lap because I thought the front row guys would beat me to Turn One, but I found the perfect revs and when the lights went green, I just flew by them! After a few laps, I had a little bit of a gap behind but as I came over the jump, I landed slightly sideways to the right and when I twisted back to the left, my right-rear tyre got on the loose and I just lost the car…

“Then on Sunday, it was wet in Q4 and I spun the wheels a lot at the start, so I figured I would lower my revs a bit and slip the clutch in the semi-final, but there was a lot of rubber on the front row of the grid which made the grip harder to predict and when the lights turned green, I just stalled. When I finally got off the line, I was last and it was very difficult to see in the spray, so I couldn’t really do much from there.

“Overall, though, I’m super happy with my driving and results – I would never have thought the weekend would go so well for my first RallyX Nordic event and maybe the toughest field I’ve ever faced. Now we need to reflect and analyse what we did well and what we can improve before the next one so we can come back even stronger.” 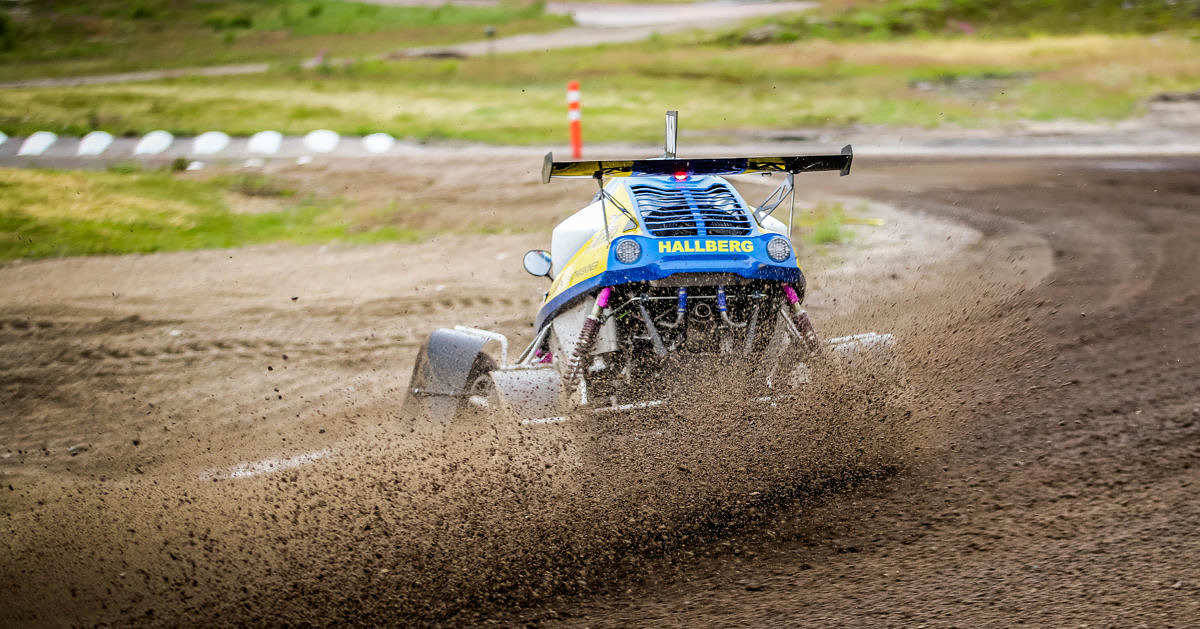