Krogstad: I don’t care who my main rival is, I’m just focussing on myself

Henrik Krogstad is taking a single-minded approach into this weekend’s RallyX Nordic presented by Cooper Tires season finale at Nysum (4-6 September), as he hopes his prior experience in circuit racing will give him a vital edge around the demanding Danish track.

Following a year away from the sport, Krogstad has returned to action in RallyX Nordic in 2020 with the Hansen brothers’ #YellowSquad outfit, and he was immediately on the leading pace in the fiercely-contested Supercar Lites class.

After bouncing back from a torrid run through the qualifying stages, the Norwegian stole second position late on in the Höljes curtain-raiser, before backing that up with fourth place in round two. Ominously, last time out at Arvika, he was virtually unbeatable, as a clean sweep of Top Qualifier honours and victory in both his semi-final and the final vaulted him to the summit of the championship standings, tied on points with Olsbergs MSE’s Jesse Kallio.

Indeed, in the only race the 22-year-old didn’t win at Arvika – Q4 – he found himself pipped to the post by the scant margin of just 0.23s. If he can replicate that dominant form in this weekend’s high-stakes double-header, it will be enough to clinch the coveted crown. 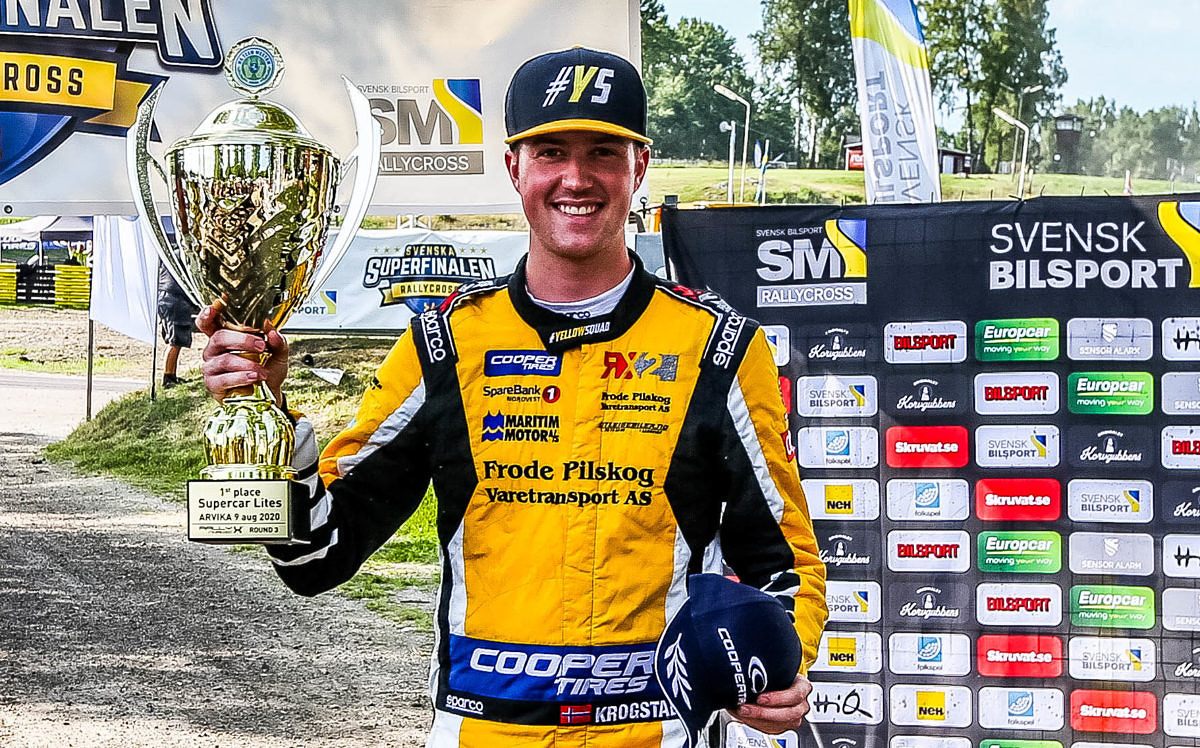 “I haven’t been watching what the other guys are doing and I don’t care which one of them might be my fastest rival,” he asserted. “I’ll just do the best I can in every situation and focus on my own driving, because there’s no point in concentrating on what’s happening with them. I’ll be trying to get the best out of everything as we did at Arvika, and by doing that, hopefully we will achieve the result we want.

“It will definitely be a close fight. Nysum is a bit easier to drive than Arvika, because it’s not quite as technical. That should mean the gaps are smaller this time. Nysum is more like a racing circuit with its straights and paved corners, and I spent two years in circuit racing and won the Scandinavian Formula 7 Championship, so my experience from that helps here.

“I feel quite a big difference now after the result at Arvika. It’s a good confidence boost knowing we can win races the way we did that weekend, and I really believe we have a strong chance to perform well in Denmark. We tested at Nysum recently and I had the same great feeling in the car as I had at Arvika, so everything feels right.

“I’m very motivated by this championship battle, and I’ve been training harder and more often than ever before in preparation for it. I’ve never been in a situation like this, tied on points going into the last event of the season with a championship on the line. I think I might call Timmy [Hansen – reigning FIA World Rallycross Champion and #YellowSquad Head of Driver Development] before the weekend for some advice, as he went through this experience last year and, of course, won…”