Ben-Philip Gundersen was unquestionably one of the standout performers in RallyX Nordic presented by Cooper Tires in 2020, and following a luckless start to his maiden campaign at Supercar level, the Norwegian finally fulfilled his palpable potential with a sensational breakthrough victory in the last race of the season at Nysum.

Having clinched RallyX Nordic’s Supercar Lites crown in 2019, Gundersen stepped up to the headlining Supercar category this year, and he was immediately on the pace. On his class debut during the high-profile ‘All-Star’ Magic Weekend curtain-raiser at Höljes back in July, he was consistently quick throughout, never finishing lower than seventh in the opening round qualifying stages to seal an excellent fifth spot in the intermediate standings. He was on-course to reach the final when his car suddenly slowed approaching the semi-final finish line.

He continued to turn heads with his scintillating starts and accomplished racecraft in round two, but once more, Lady Luck was not on his side. An electrical issue that ruled him out of Q3 was symptomatic of his fortunes, meaning the JC Raceteknik star again narrowly missed out on the final.

Although he was not originally planning to enter the following outing at Arvika, Gundersen’s stellar Höljes performance prompted a change of heart – but then ill-fortune struck again, as a hand injury forced his withdrawal at the 11th hour. He returned fighting fit at Nysum, where he was on characteristically fast and feisty form all weekend. A commanding Q2 win on the Saturday paved the way to his first podium in Supercars with the runner-up spoils – but the best was still to come.

Placing second, second and first in Sunday’s qualifiers secured the 26-year-old TQ honours for the first time in the class, and from there, he dominated his semi-final and went on to prevail in the final following a breathtaking nip-and-tuck duel with champion-elect Oliver Eriksson. His triumph vaulted Gundersen up to fourth in the end-of-season standings – just four points adrift of the top three – and capped a superb ‘rookie’ campaign in the Supercar arena. 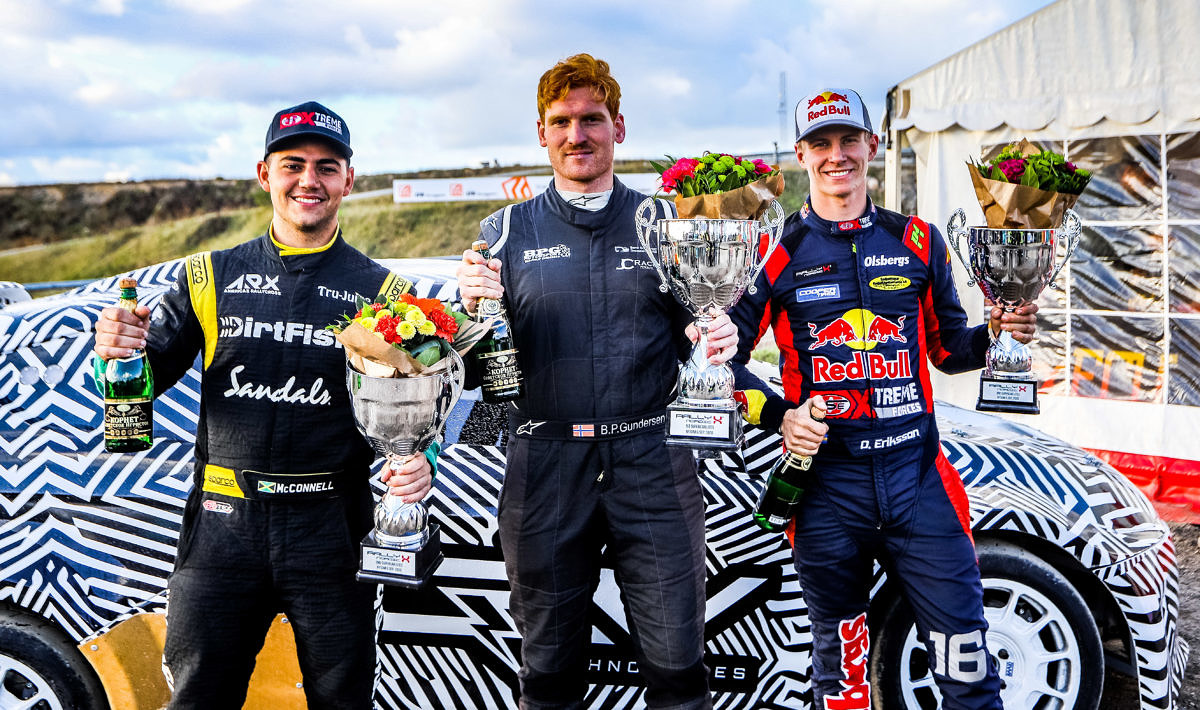 “I’m very happy with my RallyX Nordic season overall,” he reflected. “To drive on such classic rallycross tracks with a Supercar was a lot of fun, and to see that we have the speed to fight with the more experienced guys was very encouraging. To compete against so many good drivers was also extremely useful for my personal career development.

“My debut at Höljes was really enjoyable, and a bit beyond the expectations I had for myself. I knew that the competition would be tough with so many quick drivers and teams in the field, so to get so close to the final in the first round gave me a real boost going forward.

“It was disappointing not to be able to race at Arvika, because although I don’t believe I could have won the championship if I had competed there, I do think we could have been in a position to take a championship medal.

“Still, to finish the season with my first Supercar victory was very special. We had two fantastic races at Nysum. The weather was very changeable on the Saturday, which made it difficult to find the right set-up but the mechanics and the team did a great job and delivered a car that suited the track every time.

“There was a bit of chaos at the start of the final on Saturday which gave Oliver [Eriksson] a head-start and we had to fight back, but on the Sunday the conditions were much more consistent and we consistently improved. A win tastes always better if you have to fight for it, and that one was certainly a big battle!”

And what, finally, was the secret to those lightning starts?

“Train, eat, sleep, repeat!” Gundersen jokes. “Haha, no, to be serious, it requires a lot of practice to achieve a good start, but the set-up on the car and the communication between the driver, mechanics and engineer are also key factors. It’s very tricky, because the start is so important in rallycross, and I definitely still have room for improvement in that respect…”

Words to strike fear into the hearts of his rivals…