Simon Olofsson has described the 2020 RallyX Nordic presented by Cooper Tires campaign as his most enjoyable season since winning the title four years ago, as he engaged in a fierce four-way fight for Supercar Lites glory.

Of all the scraps for supremacy in RallyX Nordic this year, Supercar Lites was amongst the closest and most keenly-contested. From the outset, Olofsson, Olsbergs MSE duo Jesse Kallio and Linus Östlund and eventual champion Henrik Krogstad established themselves as the class of the field, and some of their battles were legendary.

It was Olofsson that drew first blood, with a perfect score in the Höljes curtain-raiser back in July – his first success in the series since 2017. Banishing the bad luck that had plagued him over the previous three years, the Swede topped the intermediate table courtesy of a trio of second-fastest times in the qualifiers, won his semi-final and then saw off Krogstad and Östlund to claim an emotional victory in the final. 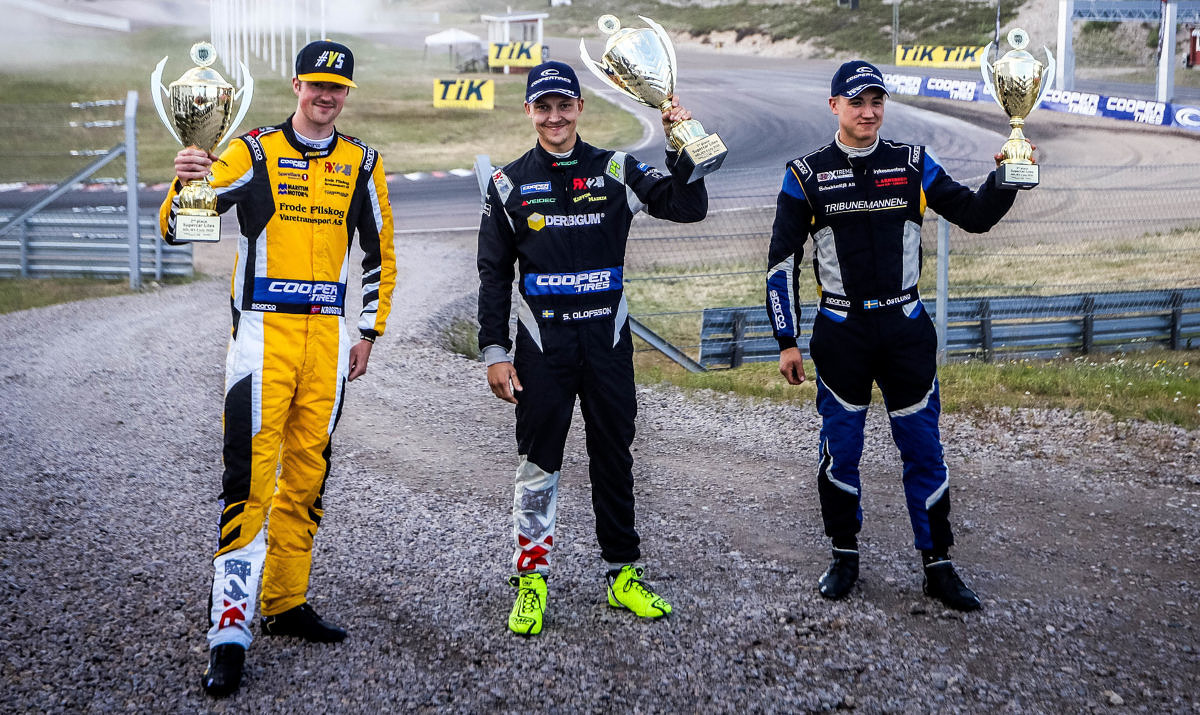 That, allied to a fifth-place finish in tricky conditions in round two, saw the Swede leave the ‘All-Star’ Magic Weekend in the championship lead – and whilst he subsequently conceded some ground following a wheel-breaking impact with the barrier four weeks later at Arvika, he was still very much in contention.

“Honestly, I didn’t have any expectations going to Höljes, but I had a good feeling following the limited testing we were able to do and we were fastest in both practice sessions,” Olofsson explained. “My biggest issue in previous seasons has been on the mental side, and when things went wrong, which they regularly did, it tended to drag me down into a negative spiral – but when you get off to a good start like we did at Höljes, the confidence starts to build. You really can’t overstate the importance of that.

“Rather than being on the back foot like before, it felt like we were properly in the mix. It had been a long time since my last major win, and it was an incredible feeling. We didn’t luck into it – we achieved the result entirely on merit – and to do so at the first proper rallycross event of the year, with such a high profile made it even more special. I can’t put into words what that meant to me – it changed everything.

“The conditions were really difficult in round two and the visibility when running behind other cars was extremely low, which made it more of a struggle but we still left Höljes leading the championship, so it was a great way to start the season. We had good speed again at Arvika, but during the semi-final, I must have caught a rut in the joker and it sent me into the barrier. That was really annoying, because I wasn’t pushing any harder than usual on that lap – it was just one of those things that happens sometimes in rallycross.”

Entering the double-header season finale at Nysum, Olofsson was just six points shy of the summit of the standings – with everything to play for. The STS RX ace looked the sharpest of the championship protagonists on the opening day as he mastered the mixed conditions to top the intermediate classification again, and a dominant victory in his semi-final saw him further close the gap – but then contact with Krogstad in the final spelt an early bath.

“We struggled in practice in Denmark but clawed our way onto the pace in time for the races,” he recalled. “On the Saturday, we never really knew what the weather was going to do next. That made it very difficult to set the car up and I was convinced we were way down the order after Q1, but clearly everybody else had the same problem.

“Everything was going perfectly, but then in the final, going over the bridge and down to the hard left-hander, Krogstad went for the inside and pushed me over the kerb. In my opinion, there wasn’t enough room for him to try to pass me there and although it was only a little touch between us, it was enough to send me round and break my steering.

“That made our job much more difficult going into the last day. Sometimes it’s good to be a little bit angry when you are racing, but I woke up feeling even angrier on the Sunday and ready to go all-in – sh*t or bust. My mindset clearly wasn’t quite right, and what happened with Jesse [Kallio] in the semi-final was completely unintentional. He braked a lot harder than I was expecting, which caught me out, but it was my mistake and I held my hand up to that.”

Unintentional as it was, the contact with Kallio saw Olofsson excluded from the race result, restricting him to third in the overall standings for the season, but as he looks back now, he does so with a justifiable sense of pride.

In arguably the highest-calibre and most competitive Supercar Lites field in recent memory, the 25-year-old was both fast and impressively consistent throughout, never placing lower than seventh in the qualifying races and only twice finishing outside of the top five. In characteristic Olofsson style, nothing was left on the table – and the championship was unquestionably richer for the part he played in it.

“The season was almost as much fun as 2016, when I won the RallyX Nordic title, and it was my most successful season since then, too,” he reflected in conclusion. “We were quick at every track, and I went into each weekend genuinely believing we had a chance to win. It was a really tough battle – probably the closest fight we’ve seen in Supercar Lites for several years, with very little to choose between the four of us at the front – and that was great both for us as drivers and for all the fans watching via the livestream.

“I need to say a big ‘thank you’ to my sister, Sandra, and her boyfriend, Christopher, because they played a big part by giving me such an easy car to drive every time. The whole STS RX operation is a big family effort, and I seriously couldn’t do this without them all.

“The current plan for 2021 is to return to RallyX Nordic in the Supercar Lites class again. Being truthful, we don’t have the budget or opportunity to make it in Supercars and I’m never going to be the next Johan Kristoffersson, so I just want to have some fun. I’ve reached a nice balance now where rallycross is a part of my life – and obviously a very important part – but it’s not my whole life. I rediscovered the enjoyment factor this year, and as long as I’m enjoying it, I want to carry on…”