Niclas Grönholm claimed victory in Round 3 of the RallyX Nordic presented by Cooper Tires Championship after an impressive performance at Höljes, holding off Anton Marklund and Grönholm RX team-mate Krisztian Szabo in the Supercar category.

The Finnish ace battled hard all day and took advantage of a semi-final puncture for points leader Johan Kristoffersson to stamp his mark on the first leg of this week’s double-header in Sweden.

Meanwhile, Tommi Hallman showed blistering pace to overhaul Nils Andersson and Linus Östlund in a thrilling final and bag his second win of the season in Supercar Lites.

Isac Egonsson emerged as winner of the CrossCar/Crosskart class while there were victories for Alex Gustafsson and Simon Tiger in CrossCar Junior and Open 2WD respectively.

Nicolas Grönholm put in a stellar display behind the wheel of his Hyundai i20 to take victory on his first RallyX Nordic appearance of the season, staying level-headed in a frenetic Supercar final at Höljes.

The 24-year-old has previous form at the Värmland circuit, bagging third in the opening race of the 2020 ‘Magic Weekend’ and finishing top qualifier in the second event – only to run into mechanical issues.

There were no such problems this time around as Grönholm worked throughout the day to find a balance with his car, finishing third in Q1 then matching that result in Q2 after a thrilling wheel-to-wheel duel with Krisztian Szabo and Johan Kristoffersson.

The three-time FIA World Rallycross Championship event winner followed that up with second place in Q3 after a stunning pass on Szabo and took the runner-up spot in his semi-final, recovering well to finish behind Anton Marklund in a fractious affair that saw Lars Andersson involved in a high-speed accident and Kristoffersson bow out with a puncture.

Starting the final from the second row of the grid, Grönholm was forced into a lap one joker due to congestion at turn two but made the most of the clear air and leapfrogged early leader Sondre Evjen when the latter ran wide at turn one and was forced into a joker of his own.

Slight contact between Marklund and Szabo slowed the pair, who took their jokers in unison, leaving the way clear for Grönholm to cruise to the flag. Fraser McConnell was the highest placed  of the RallyX Nordic championship contenders in fourth for Olsbergs MSE, securing a solid haul of points to aid his title challenge, while Sondre Evjen was fifth following a three-second time penalty and Philip Gehrman rounded out the top six. 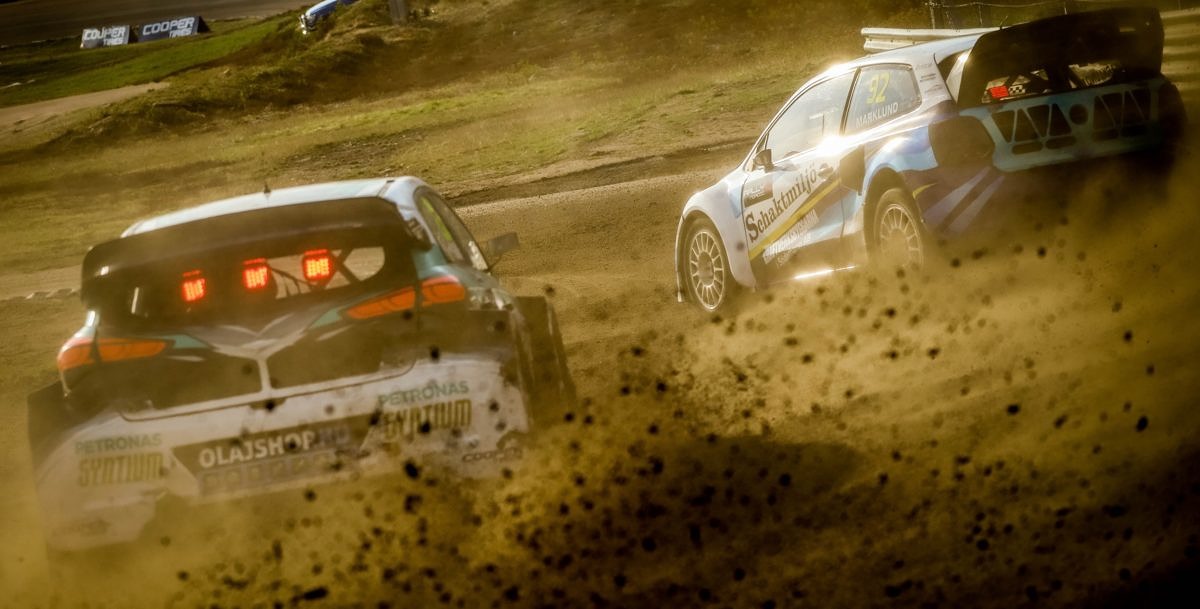 Meanwhile, Andreas Bakkerud and Henri Haapamäki caught the eye as the duo raced electric cars against internal combustion engine rivals in a series-first for RallyX Nordic. Bakkerud, a veteran of World RX with seven wins in the premier series, made further history with victory in his Q2 race and gave a glimpse towards the future of rallycross.

Today’s results leave Kristoffersson top of the standings despite his troubles, with the three-time World RX Champion having finished top qualifier following a clean sweep of fastest times early in the day. The Swede sits four points ahead of Evjen, who is in turn four ahead of McConnell prior to the second leg of the Höljes double-header, set to take place across Saturday and Sunday.

Grönholm said: “It wasn’t the easiest win today – it was nerve-wracking! I had the pace to go a little bit quicker but in the end I knew that those ahead hadn’t taken their jokers so I tried to keep the car in one piece and avoid punctures.

“The result is good, but I’m not completely happy with it. We’ve been struggling all day and we need to sit down and find out why. On the bright side, we got the win but there were some tough competitors who didn’t make the final. I hope they will on Sunday so we can have a rematch with Johan and Enzo [Ide] – if we can match their pace, I will be a bit happier.”

Supercar Lites rookie Tommi Hallman continues to enjoy an outstanding start to his first season in the category, with the Finn successfully navigating a frantic day of racing to claim a second win from three starts.

The SET Promotion driver was third on his debut in Round 1 at Nysum then bagged top spot 24 hours later, and his most recent success leaves him comfortably clear at the top of the points standings.

It was Nils Andersson who set the early pace with the Kristofferson Motorsport ace finishing top of all three qualifiers ahead of local hero Linus Östlund, while Simon Olofsson had a day to forget as his luckless season continues. The STS RX driver was squeezed wide at the first corner in Q1 and then suffered technical difficulties but bounced back to win Q3 – only to experience more trouble when he ended his semi-final in the gravel following contact with Östlund.

Hallman had a relatively trouble-free passage to the final, finishing second behind Andersson in his semi-final, although Niklas Aneklev had a scare when his Team Ramudden/Olsbergs MSE-run car was pitched into a roll at turn one in the same race.

In the final, Andersson led off the line but was hounded by Östlund while Hallman ducked out of traffic to take a lap one joker. This move proved decisive, with the Finn pumping in the quick times to first pip Östlund then Andersson as those in front took their respective jokers.

Hallman said: “We were watching the Supercar semi-finals to see when we should go for our joker, and that helped us with our plan – which worked well! I pushed hard in the final, and I really tried my best.

“My Dad was driving competitively when I was a kid so I have a lot of knowledge from then, but I still have a lot to learn. It’s going quite well so far though!”

Isac Egonsson produced a blinding display in the CrossCar/Crosskart final to pull off a brilliant victory as his rivals ran into trouble.

With championship leader Sebastian Enholm missing this weekend’s event, Round 2 winner Isak Reiersen looked set to capitalise and claimed bragging rights in Q1 and Q2 to finish top qualifier – but a puncture in his semi-final dashed hopes of a repeat victory.

Ronalds Baldins showed a turn of pace to take Q3 and the Latvian followed that up with a semi-final win while the consistent Patrik Hallberg was also top of the pile in his semi, ensuring the pair locked out the front row for the final. However, they had no answer for Egonsson – the third semi-final winner – as the Carcontrol driver produced a near-perfect performance to work his way through the field and secure a thrilling victory.

Egonsson said: “After the first qualifying session I was P2 and felt really good, but my pace dropped and I made a few mistakes. I felt like the speed wasn’t there today but I then won the semi-final, which let me start P3 for the final. I took the joker first and then I just had to keep pushing and pushing!”

Simon Tiger continued his dominance of the Open 2WD category after another clean sweep. The Swede won every single session at the wheel of his BMW E30 M3 before taking a comfortable victory in the final ahead of his nearest challenger Mathias Jansson, and has picked up maximum points from the three rounds so far this season.

In CrossCar Junior, reigning champion Alex Gustafsson bagged his first win of the season after a perfectly timed pass on Erik Nilsson during an entertaining final. The 2020 title-winner was only placed third at the intermediate stage – despite victory in the first qualifying round – but kept tabs on standings leader Lukas Andersson in their semi-final before a daring lunge on Nilsson in the last CrossCar Junior race of the day earned him the spoils. The result vaults Gustafsson up to second in the points table behind Andersson, while Nilsson sits third after his second-place finish at Höljes.

Competitors will only have a day to catch their breath before the RallyX Nordic action resumes at Höljes with Round 4 of the 2021 campaign, starting on Saturday (15 May) and concluding on Sunday (16 May).