Isak Reiersen has praised rivals Patrik Hallberg and Jimmie Österberg after the trio were involved in a thrilling final-day shoot-out to decide the 2021 RallyX Nordic CrossCar/Crosskart title.

Heading into the seventh and final round of the season at Arvika level on points, all three drivers were evenly-matched across the weekend and entered the last race of the year still just separated by a single point.

And it was Reiersen who eventually claimed the crown, beating Hallberg by 0.042 seconds at the end of a titanic tussle in one of the closest rallycross finishes ever recorded.

“This feels absolutely fantastic,” said Reiersen. “After two third places in RallyX Nordic, I entered the season with a new crosskart and had a fresh start. I always knew I was fast, so it feels amazing to have that proof now in black and white.

“The final was quite exciting… I led all the time, and when I went into the last lap I heard my spotter say “push”. He doesn’t say that much and I heard in his voice that now it was really urgent. When I went into the joker I lost some speed on the entry, but still carried good momentum though the exit. I chose to go on [Patrik] Hallberg’s right side and it worked just fine. I immediately felt that I’d done enough over the finish line, but in hindsight it seems that the margin wasn’t so big.”

Reiersen, Hallberg and Österberg were the class of the CrossCar/Crosskart field all year, although various incidents meant Hallberg failed to reach the top step of the podium and Österberg only claimed one victory compared to Reiersen’s three.

The EKS JC youngster, who recently impressed on his four-wheel drive debut at Höljes in the new FIA RX2e Championship, was quick to praise his front-running rivals after a fantastically entertaining campaign. 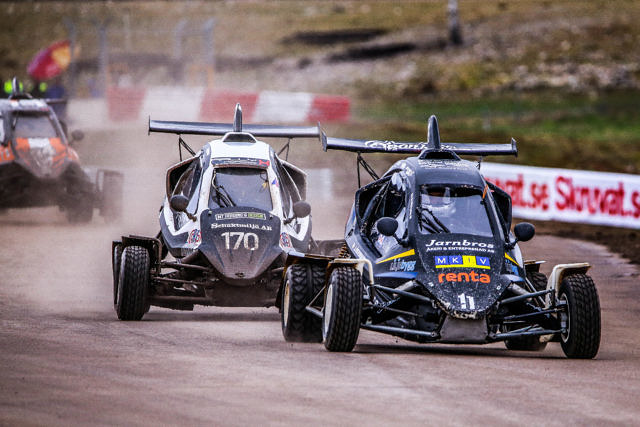 “We were three drivers fighting for the championship title in the last race, and I could not have imagined two better competitors,” said Reiersen. “Patrik and Jimmie are very fair drivers on track. In a class with such a high minimum level, and where you always have to drive right on the edge, it’s been good to have them for us to constantly push each other.

“I want to say big thanks to the team and my sponsors, who together made this possible. And maybe an extra big thank you to my mechanics who worked until 4am on the last day of the season fixing the gearbox, we got a good reward for that!”