George Megennis caught the eye with a fantastic debut in the RallyX Nordic Supercar Lites category at Arvika, and now the teenager is focusing on making his mark in Nitro Rallycross.

Megennis was one of several additional entries bolstering the Supercar Lites class at the 2021 season finale, with the 16-year-old enjoying the support of #YellowSquad on his first-ever rallycross event.

And the US youngster stunned the RallyX Nordic regulars by taking a race win and finishing sixth overall as he excelled in changeable conditions and unfamiliar machinery.

Megennis said: “I am so stoked after my first taste of Supercar Lites action – Arvika was incredible, and the results were so much better than I thought they would be.

“RallyX Nordic is super competitive and if you look at the history of this Lites category, some of the best drivers in the world championship started out here. So to be fighting for race wins and qualifying for the final at my first attempt is unbelievable.”

Megennis quickly got up to speed in practice before winning his Q1 race in difficult conditions. He then backed up this performance with another solid display in Q2 to leave him tied with newly-crowned series champion Tommi Hallman overnight.

The #YellowSquad prodigy didn’t ease off on Sunday, demonstrating consistent pace to secure fifth in the intermediate standings before holding off experienced rival Linus Östlund to claim second place by 0.191 seconds in his semi-final race.

There was no fairytale ending for the New York native, with contact in turn one leading to a penalty in the final, but Megennis has shown more than enough to indicate he will be one to watch in NRX NEXT – the support category of the Nitro Rallycross series. 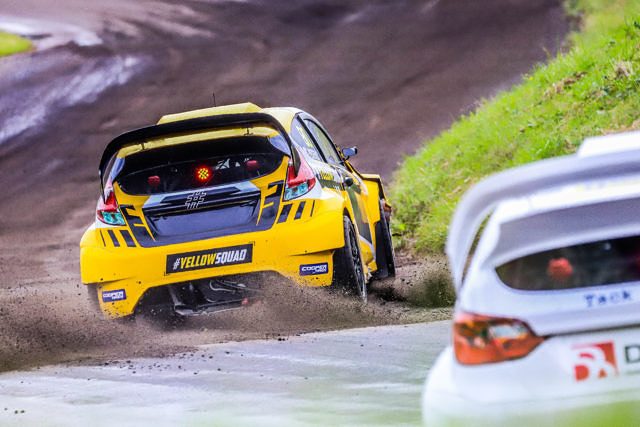 Megennis said: “Now I know what my pace is like against the best drivers in Europe, I’m going back home to the US feeling really confident about the season ahead in NRX NEXT – especially as I’m guessing some of the guys I raced at Arvika might show up over there!

“I know that my level is already strong, but also that I’ve got so much more learning to do and can be even faster with more experience.

“I’m so grateful for all the work the #YellowSquad guys are putting in – Eric Färén and the crew gave me an amazing car all weekend, and all the years of knowledge Kevin Hansen has helped me improve so quickly. I wouldn’t have been able to pull off such a mega weekend without their help. I can’t wait for Nitro Rallycross to start and get back in this car!”

As for #YellowSquad, Team Principal Kevin Hansen believes there is much more to come from their young talent.

“We knew George had a lot of potential and has been working so hard to maximise everything,” he said. “But we have still been blown away by how good his performance has been. To win that first qualifying race in the rain, when we hadn’t had any opportunity to give him test miles in wet conditions, was something very special. And his pace for the rest of the weekend was just as good.

“While we didn’t quite have the luck we would have hoped for the final, what matters is that George has already shown such a high level so early in his rallycross career. We can see the progression he is making every day he is in the car, and he still has room to improve and go even faster than this weekend.

“The amount you learn from completing your first race weekend in rallycross is huge. Now George can go into the Nitro season full of confidence, with better knowledge of the car and how it behaves, and knowing he has the speed to compete at the front. We can’t wait to get started in the US – George is a super cool, fast and professional guy with a bright future in this sport.”