Round one of the 2019 RallyX Nordic presented by Cooper Tires championship exceeded all expectations with close racing throughout the four classes on one of the world’s most renowned and prestigious Rallycross tracks – Höljes. The first of two days racing at the double-header curtain-raiser gave the fans amazing comebacks, shock exits and drama by the bucketload.

The headlining Supercar class was filled with excitement from Q1 until the final. Robin Larsson dominated the qualifying races and looked like one of the favourites going into the semi-finals, but his luck ran out when he suffered gearbox issues causing him to spin and eventually, putting him out of contention for a place in the final. It was then left for Kevin Eriksson and Peter Hedström to battle it out for honours, they each won a semi-final and progressed to the front row of the grid.

Hedström had a poor start to the final allowing Jere Kalliokoski to slot into second place behind Kevin Eriksson. Peter took the joker lap straight away to give him free air which eventually worked to his advantage. Meanwhile Oliver Eriksson was tucked in behind Kalliokoski and pressuring him throughout the race. As the top three went through the joker lap on their final circuit, Hedström’s strategy had paid off and he appeared in second place. Kevin Eriksson took the chequered flag ahead of Hedström and Kalliokoski. 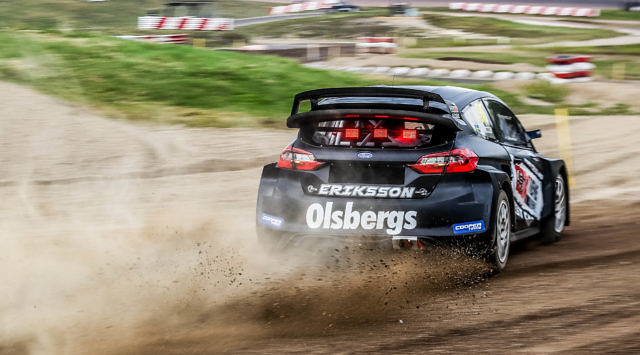 “We learned both good and bad things today, but the result is good,” reflected the former FIA World RX race-winner. “We did what we came here to do – learning was the first goal and winning the second, and we achieved both!

“It’s always fun to win, but honestly, from the first corner, I didn’t expect it because I was down quite a lot on horsepower. I don’t know why, so we need to check that for when Sebastian [Eriksson] gets in the car tomorrow. Right from the start I could feel that I was missing the push from the engine, but it was enough to stay ahead.

“I knew from day one that I would have to hand this car over to Seb tomorrow so that’s no problem. We are both developing this car to win in World RX in the future, so that’s the goal. He’s a very competitive driver as well, and it’s good to have two experienced drivers to develop a car; it’s easy to fool yourself and the second guy can say, ‘no, that’s not the way to go’, so it’s going to be good.”

Thomas Holmen was the story of the day in Supercar Lites. The Norwegian teenager has not raced in rallycross for over a year but won races consistently all day. Ben-Philip Gundersen and Simon Olofsson were also on fine form, chasing Holmen every step of the way.

In the final, Holmen was on pole with Gundersen second on the grid. Ben-Philip got an excellent start and managed to take the lead into turn one, but as they entered turn two Holmen and Sondre Evjen made contact, causing chaos in the pack behind. Holmen retook the lead with a scintillating move around the outside of Gundersen who dramatically slowed with a problem at the rear of his car. On his return to racing, Holmen managed to hang on to his lead to take his first RallyX Nordic victory ahead of Olofsson and Evjen. 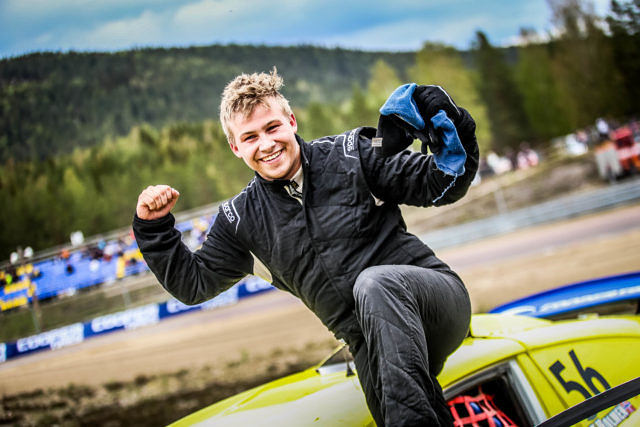 “It’s so good to be back!” the 19-year-old enthused.“To be on top of the podium for the first time in Supercar Lites, I am so happy – words can’t explain it. It’s so long since I have felt that much adrenaline and that many emotions at one time.

“I came here with no expectations – just to have some fun. We started off great with a qualifying race win, and from there I knew we had really good pace. With good communication with my team-mate Simon Olofsson, we had a good semi-final and after a rough start to the final, we got the win – just unbelievable. What a comeback!”

The RX Academy field was unpredictable and hotly contested throughout the day. Tommi Hallman and Jimi Kalliomäki were the ones to watch after each of their convincing semi-final wins. Hallman made a great start and took the lead from the off, Marko Muru and Jonne Ollikainen slotted in behind. After some jostling for the podium places at the last corner, Hallman took the chequered flag ahead of Rasmus Tuominen.

The CrossCar category was a story of two cars, Nils Andersson and Ole Henry Steinsholt each won a semi-final with a comfortable advantage and led the way from the off in their final race of the day. Ole Henry kept Nils in check every step of the way but Andersson hung on to eventually take the win.