2020 was nothing if not dramatic for Linus Östlund, from the high of Swedish Championship (SM) glory at Arvika to the low of barrel-rolling his way out of the RallyX Nordic presented by Cooper Tires title fight at Nysum. The one constant was his scintillating raw speed, which kept him in contention for the coveted crown right to the very last day. Here is the story of his season.

As one of the more experienced Supercar Lites protagonists, it was perhaps no surprise that Östlund was on the pace from the outset this year, particularly with the double-header RallyX Nordic curtain-raiser taking place at his home track of Höljes.

A podium double was his reward for a consistently strong performance – topping the times in Q3 on the opening day and not placing lower than fifth throughout the qualifying stages in round two – but that omits one fairly major detail. The Swede was on-course to win his semi-final before finding himself sideswiped by an unsighted Marcus Höglund at the joker exit on the last lap. A superb save rescued second place – but cost him pole position for the all-important final. 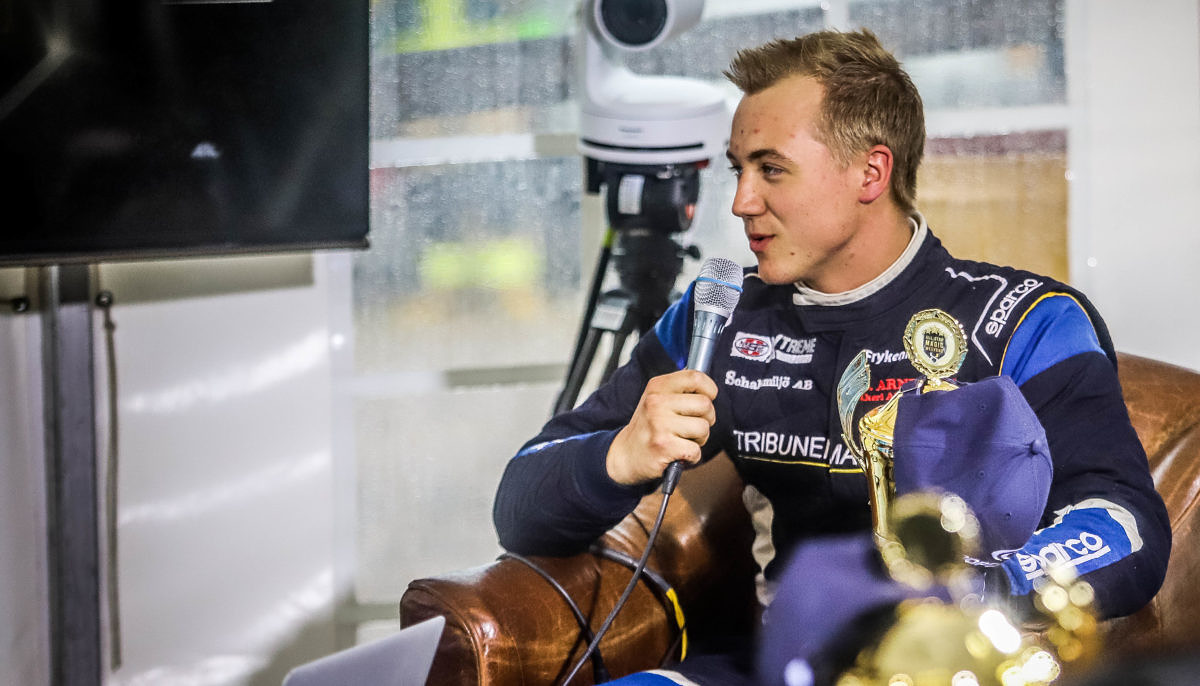 Despite making a lightning getaway to split the front row starters, Östlund ultimately lost out to early joker Mats Oskarsson in the final and was forced to settle for third at the chequered flag – a result that nonetheless left him only four points shy of the championship lead.

At Arvika next time out, the Olsbergs MSE ace proved to be the only driver capable of getting the better of #YellowSquad’s Henrik Krogstad, snatching the fastest time in Q4 by less than a quarter-of-a-second to deservedly secure P2 in the intermediate standings. He was running a comfortable second in the final when suspension breakage dashed his charge and demoted him to fifth at the flag, although he could at least console himself with the SM gold medal. 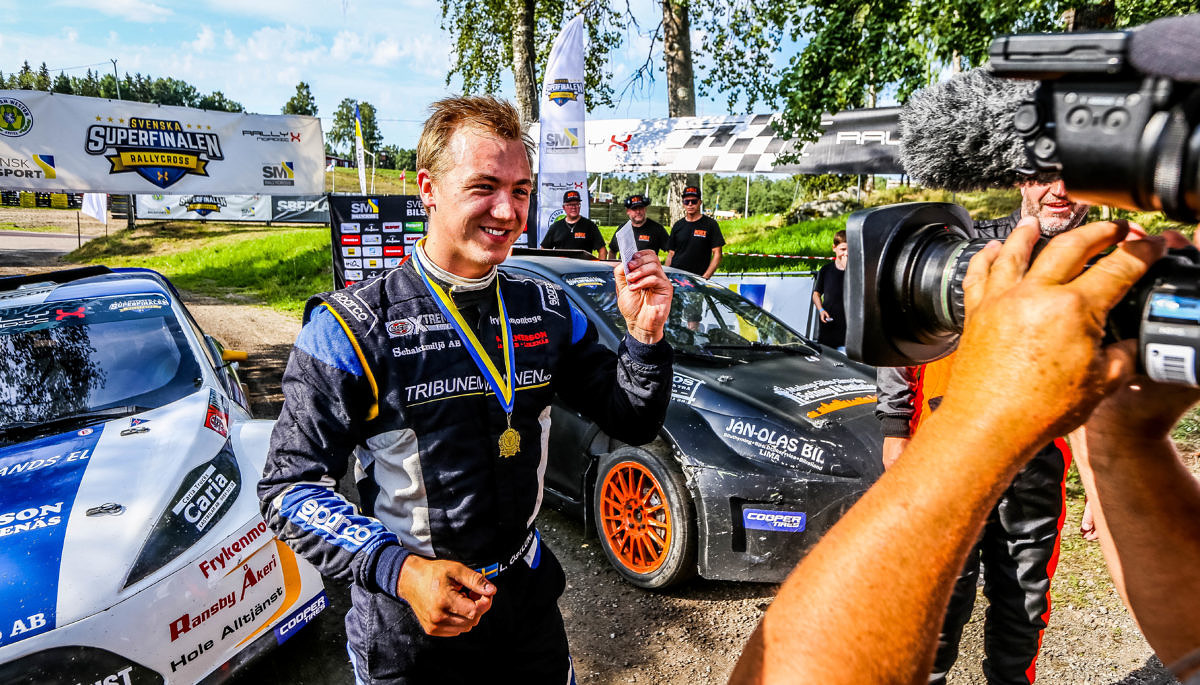 Östlund subsequently headed into the Danish double-header finale at Nysum as one of four chief contenders for the laurels, just two points adrift of the top of the table. There-or-thereabouts on the first day, fourth place in the final – barely half-a-second adrift of the rostrum – elevated him to second in the standings with just one round remaining, but the Sunday was emphatically not to be his day.

Only ninth after Q1, the 21-year-old was bidding to climb the order in Q2 when a joker merge collision with team-mate Martin Enlund sent him into a series of spectacular high-speed barrel-rolls. Thankfully, Östlund emerged unscathed – albeit somewhat shaken – but his day looked to be over.

That, however, was to count without the commitment, perseverance and sheer skill of the OMSE crew, who – with the assistance of a few members of rival teams – produced an astonishing repair job that allowed the Sysslebäck native to live to fight another day. Their driver rewarded them with an equally astonishing fifth place behind the wheel of a hastily patched-up car in Q3 to creep into the semi-finals by a single point.

Although the damage to his title bid had already been done, fourth position in the final reckoning was still a commendable achievement for an impressive campaign, which saw Östlund firmly establish himself as one of the class’ leading lights. 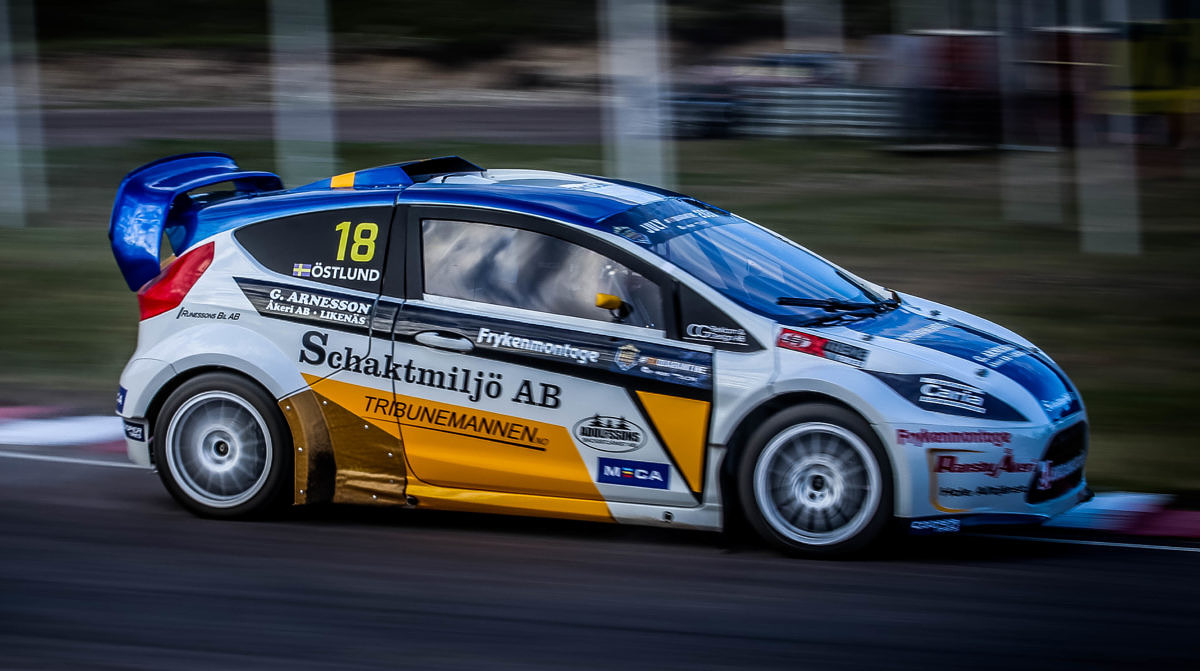 “It was a really hard-fought season, with a lot of fast drivers in Supercar Lites,” he acknowledged. “It felt like the level definitely stepped up a bit compared to 2019. We were quick everywhere, and it was a really close battle for the title between myself, Henrik [Krogstad], Jesse [Kallio] and Simon [Olofsson]. They’re all very experienced guys and it was fun racing against them, and always fair.

“I’ve got to be honest, I was disappointed not to win at Höljes – although it’s my home track, victory always seems to elude me in the big events there. We had the pace, particularly on the Sunday, but the contact in the semi-final relegated me to the second row of the grid in the final and at this level with such fine margins, it’s never easy to win from there.

“I didn’t see Marcus [Höglund] coming at all, so there was no chance to take avoiding action and I was fortunate that the grip was so good on the grass, which meant I didn’t lose too much time. Still, without that clash, we would have been on the front row for the final and given how good our starts were in the wet, it could have been a whole different outcome. That’s motorsport sometimes…

“At Arvika, I was the only driver who could really take the fight to Krogstad. I was trying to pull him back in during the final when a bolt broke on the suspension and that was that. If you just go by the results, it looked like Henrik was unbeatable that weekend, but we certainly gave it our best shot. If it hadn’t been for that misfortune, we would have gone to Nysum leading the championship, so it’s fair to say we lacked a little bit of luck at times.

“Still, I felt good arriving in Denmark and we had been quick there the previous year, but we never quite unlocked the speed we were searching for on the first day and I made some mistakes in pushing too hard. It’s difficult to gain time around such a high-speed circuit, and we were just lacking that last little edge.

“Then on the Sunday, obviously, everybody saw what happened. It was another joker merge collision and, like at Höljes, completely unexpected. I only felt a little touch to begin with and didn’t think too much of it, but then I went up on two wheels and once the car dug into the gravel, it just sent me over and over. It seemed to last an eternity and there’s no question that it was the biggest crash of my career.

“Looking at the state of the car afterwards, I was ready to pack my bags and try to catch an earlier ferry home – I never thought for a moment that it would be fixable, but these OMSE guys are something else and worked miracles to repair it in time for me to go again in Q3. That was a hell of an effort, for which I can never thank them all enough. I was a bit afraid of getting too close to other cars after that, but psychologically, I knew how important it was to get straight back out there again.

“Clearly it wasn’t the way I wanted to finish the season or for my title challenge to end, but overall, I can’t be disappointed with what we achieved in 2020. It was a very positive year in extremely difficult circumstances, and we came away with a Swedish Championship medal and two podium finishes from five RallyX Nordic starts. I don’t think we can complain too much about that.” 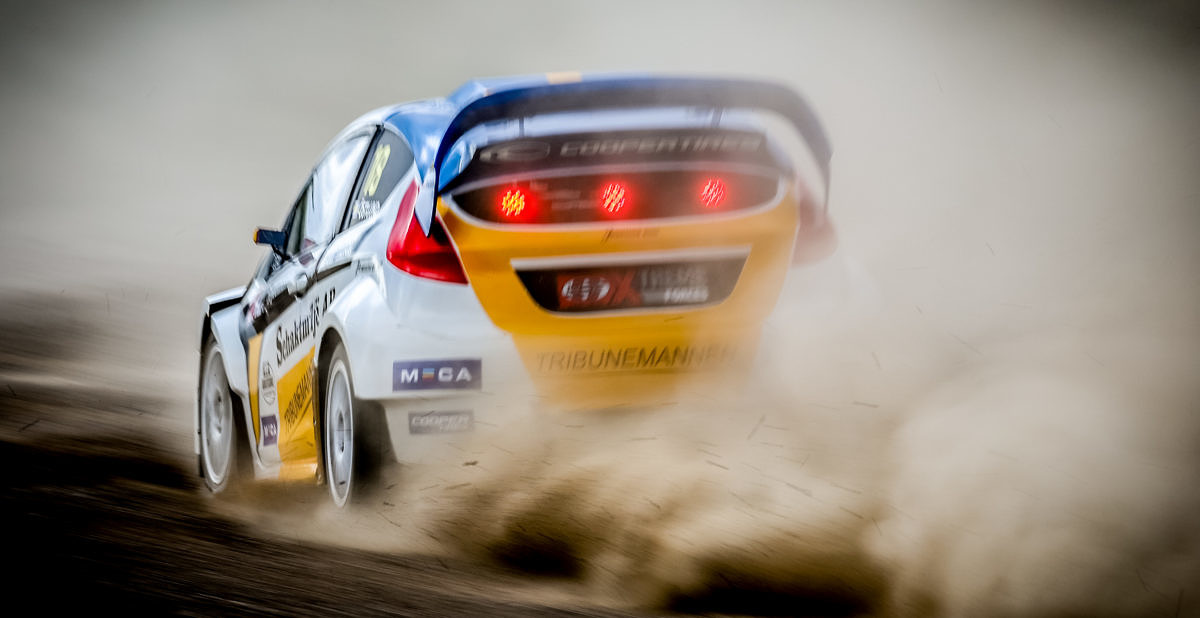