Grönholm doubles up at Höljes after duel with Kristoffersson

Niclas Grönholm made it two wins from two in the 2021 RallyX Nordic presented by Cooper Tires season after doing the double at Höljes.

The Finn claimed the spoils in Round 3 of the Supercar campaign at the iconic Värmland circuit on Thursday and then held off a hard-charging Johan Kristoffersson to win Round 4 today (May 16).

Nils Andersson secured his first victory of the season in Supercar Lites, overcoming an in-form Tommi Hallman, while Isak Reiersen moved ahead in the CrossCar/Crosskart championship with his second success of the year.

Elsewhere, Simon Tiger was once again on top in Open 2WD and Alex Gustafsson showed his class in CrossCar Junior.

Niclas Grönholm was in imperious form to secure back-to-back Supercar wins at Höljes this week, following up his battling Thursday victory with a classy success on Sunday.

Level on points with Fraser McConnell after Q1 and Q2 on Saturday, the Finn picked up where he left off by setting the fastest time in Q3 – having been pushed hard by a recovering Johan Kristoffersson after the three-time FIA World Rallycross Champion was forced into an early joker.

Anton Marklund sprang a surprise in Q4 by claiming top spot at the wheel of his Hedströms Motorsport VW Polo but Grönholm kept his nose clean during his final qualifying race and followed Grönholm RX team-mate Krisztian Szabo home to bag third in the session and clinch Top Qualifier honours.

The 24-year-old enjoyed a trouble-free run through his semi-final, with second-placed McConnell instead catching the eye thanks to a charge up the field after a slow start. Meanwhile, Kristoffersson demonstrated a rapid turn of pace to overhaul Szabo and book his spot on the front row for the showpiece event.

The Swede was left with more work to do in the final after being forced into a lap one joker by the fast-starting McConnell, but there were no such concerns for Grönholm who shot into an early lead and proceeded to build a significant margin.

Kristoffersson pulled off an audacious pass on Andreas Bakkerud to keep the pressure on Grönholm and the Swede then picked off McConnell as the Olsbergs MSE driver took his joker lap, but his efforts to catch the Hyundai i20 out front were ultimately in vain as Grönholm confidently managed the gap.

McConnell claimed third to keep his title hopes alive, Szabo was fourth and EKS JC’s Enzo Ide finished fifth ahead of Bakkerud – with the World RX frontrunner making history by reaching the final in his STARD-run electric Ford Fiesta.

Kristoffersson’s second place means he retains the lead in the Supercar standings, 13 points ahead of McConnell and a further five clear of Sondre Evjen while Grönholm sits joint-fourth with Ide following his two appearances at Höljes.

Niclas Grönholm said: “I’m definitely more satisfied with this win than on Thursday! To be honest, the first laps I didn’t know what the gap was behind, they didn’t tell me but it got to the stage where Jussi [Pinomäki] said we need a bit more, luckily I found it and managed to push without making any silly mistakes so that’s something to be satisfied with.

“It’s always nice to compete, that’s why we entered RallyX Nordic this weekend. We can create similar conditions in testing but we wouldn’t know what the pace is around us but here we had an indication of what that is so I think it’s a win-win situation. For sure it feels nice to get these two victories so I’m happy but as always, the hard work continues.”

The Kristoffersson Motorsport ace demonstrated consistent pace all weekend, registering a second and trio of third-placed finishes in the four qualifying sessions before stepping up another level at the business end of the meeting.

Andersson, who has progressed dramatically from his debut season in the category last year, comfortably won his semi-final by almost four seconds ahead of Casper Jansson and made the most of a front-row spot in the final to beat Hallman into turn one.

Championship leader Hallman had finished TQ after posting the fastest time in three sessions, but soon found himself leapfrogged by Östlund after the Olsbergs MSE driver took an early joker. Östlund, who boasts vast experience at Höljes, also posed a threat to Andersson with a series of quick laps but was ultimately unable to overhaul his rival and had to settle for second. 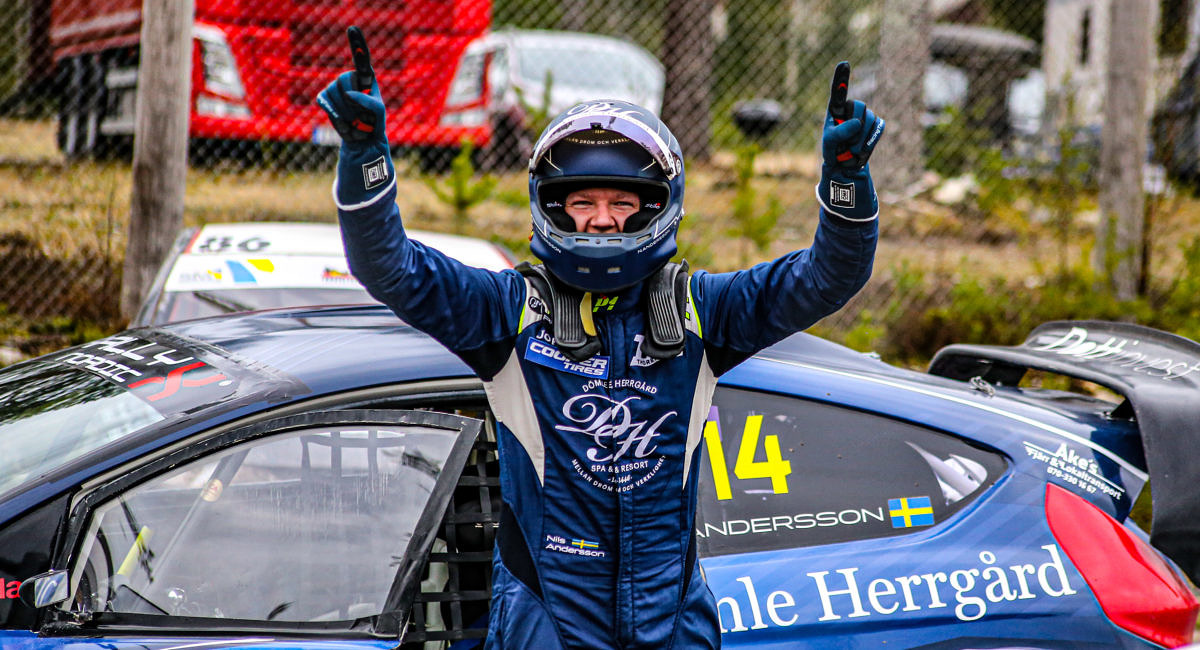 Third place for Hallman means he has now notched up four consecutive podiums – including two wins – since making his debut in Supercar Lites while Martin Jonsson finished fourth ahead of Jansson and Mats Oskarsson.

Meanwhile, Simon Olofsson’s run of bad luck continued as the Q4 winner missed Sunday’s final after being handed a nine-second penalty for exceeding track limits in his semi-final.

Nils Andersson said: “Yes! Finally! This is amazing. I finally got to drive in my own rhythm because in the last race Linus [Östlund] was hunting me like mad. There’s a big difference between having someone who is close behind and someone going for the gap. This time I could go at my own pace and luckily it was enough. Johan [Kristoffersson] told me to go out and get as many points as possible and I said ‘OK but I still want to win’ so I did both!

“Of course, Tommi [Hallman] has done a great job in the first four races but there is still some more to go so I would like to finish off the season in the best way possible at my home town at Arvika. I’ve never been to OuluZone where the next race is but it looks more like a racing style of track which I enjoy, so I’m looking forward to that!”

Isak Reiersen came out on top after a scintillating day of action in the CrossCar/Crosskart category, producing an imperious performance to claim his second win of the year.

Jimmie Österberg headed the intermediate standings after three fastest times from four qualifying sessions and the Power RX driver looked the man to beat after victory in the first semi-final, but Reiersen and Patrik Hallberg both logged quicker times on a drying track to set up a mouth-watering final.

And it was the EKS JC driver who emerged victorious, flying off the line to take control of the race before settling into a rhythm and pulling out half a second on his penultimate tour to ensure a comfortable final-lap joker. Österberg finished two seconds back while Jarkko Aronen got the better of Hallberg for the final podium position.

Reiersen, who also dominated Round 3 at Höljes on Thursday before retiring with a puncture at the semi-final stage, now leads the Championship with 96 points from Hallberg (92 points) and Österberg (86 points).

Simon Tiger made it four victories from four in the Open 2WD class, but he had to work for his win after an impressive display from Mathias Jansson. Jansson, who was also driving his Volvo S40 in the Swedish Championship concurrently running at Höljes this weekend, won the first three qualifying sessions to claim TQ but was unable to stick with Tiger in the final while Morten B Bertelsen finished third.

Reigning CrossCar Junior champion Alex Gustafsson matched Supercar star Grönholm by also completing a Höljes double. The EKS JC racer looked to have his work cut out after Erik Nilsson won three out of four qualifying sessions and his semi-final, but Gustafsson showed excellent racecraft to battle his way to the front and hold off a hard-charging Mikael Uitto – who had earlier stolen the show with a semi-final victory despite a false start and two joker laps – while Nilsson finished third.

Finally, this week saw RallyX Nordic play host to a one-off Superteam Challenge where an all-star line-up of rallycross talent teamed up to compete in the new FIA RX2e Championship cars. Kristoffersson, Timmy Hansen and Sebastian Eriksson claimed bragging rights in the demonstration competition, getting the better of Bakkerud, Kevin Eriksson and Marklund in one team and Oliver Eriksson, Kevin Hansen and World Rally Championship legend Marcus Grönholm in the other.

The RallyX Nordic action continues at OuluZone in Finland on June 5-6, before concluding at Arvika in Sweden on August 13-15. Catch up with all the highlights from the 2021 season so far on the RallyX Nordic YouTube channel.