The Final Showdown: Titles on the line in Danish double-header

Next weekend, champions will be crowned in all four classes of RallyX Nordic presented by Cooper Tires at Nysum in Denmark (4-6 September), and as a dazzling double-header of livestreamed action awaits, the battles could scarcely be closer.

Following three drama-fuelled rounds to-date – at legendary Swedish circuits Höljes and Arvika – everything now comes down to this: two days of doorhandle-to-doorhandle competition around the classic, fast-and-flowing Nysumbanen track, which has played host to many a memorable duel in RallyX Nordic history.

Fans will be able to enjoy more than ten hours of high-octane entertainment via the global, non-geoblocked livestream, starring the ‘Voice of Rallycross’ Andrew Coley, studio host Neil Cole and esteemed British journalist Hal Ridge. ‘Early Bird’ subscriptions are available for just 129 SEK (c. €12,99) until the end of August, after which the price increases to 199 SEK (c. €19,99). The sign-up link is here.

The closest title tussle is in the Supercar Lites class, in which Henrik Krogstad, Jesse Kallio, Linus Östlund and Simon Olofsson are blanketed by just six points at the top of the table.

Returning to the track following a year’s absence, Krogstad has been on the pace from the outset, and if he was out-of-luck in the Höljes curtain-raiser, the #YellowSquad star was on unbeatable form at Arvika, only being denied a clean sweep of fastest times by an inspired Östlund as the Swede pipped him to the chequered flag by less than a quarter-of-a-second in Q4.

Krogstad arrives at Nysum tied on points at the summit of the standings with Olsbergs MSE rival Kallio, who dominated at Höljes only for a gearshift issue on the opening day to scupper a likely double victory. The Finn struggled through the semi-final and final at Arvika with a wrist injury, but he will be fighting fit when battle resumes next weekend.

OMSE stablemate Östlund is the only one of the four contenders for the crown not to have won yet in 2020, but last year’s RallyX Nordic championship runner-up has been the model of consistency. On the podium in both contests at Höljes, the Swede was Krogstad’s nearest challenger at Arvika until a suspension breakage in the final dropped him to fifth place.

Olofsson celebrated a hugely popular success in the opening round of the campaign at Höljes, and the STS RX ace has remained a front-runner ever since – although he was left ruing an error at Arvika that saw him break a wheel at the semi-final stage. The Swede is still just six points adrift of the top of the classification, however, setting the scene for a sensational showdown in Denmark.

Two-time FIA World Rallycross Champion Johan Kristoffersson leads RallyX Nordic’s Supercar standings following a brace of victories from the first three rounds, but with the Swede absent at Nysum, the door is open for one of his challengers to snatch the coveted crown.

Leading the chase is Oliver Eriksson, who engaged in a fierce duel with Kristoffersson at Arvika three weeks ago before a double puncture curtailed his charge. The Swede arrives with a spring in his step off the back of a dominant victory on his FIA European Rallycross Championship debut last weekend, and holding a nine-point advantage over Olsbergs MSE team-mate Fraser McConnell.

The Jamaican only stepped up to Supercar level this year, but he has made an instant impression, progressing through to the final at Höljes and going on to out-fox Kristoffersson at the start of Q1 at Arvika. He proceeded to push the Swede hard throughout the weekend, until a Turn One squeeze sent him spearing onto the grass – and out of the podium battle. With his characteristic swashbuckling style, McConnell is sure to put on a spectacular show at Nysum. 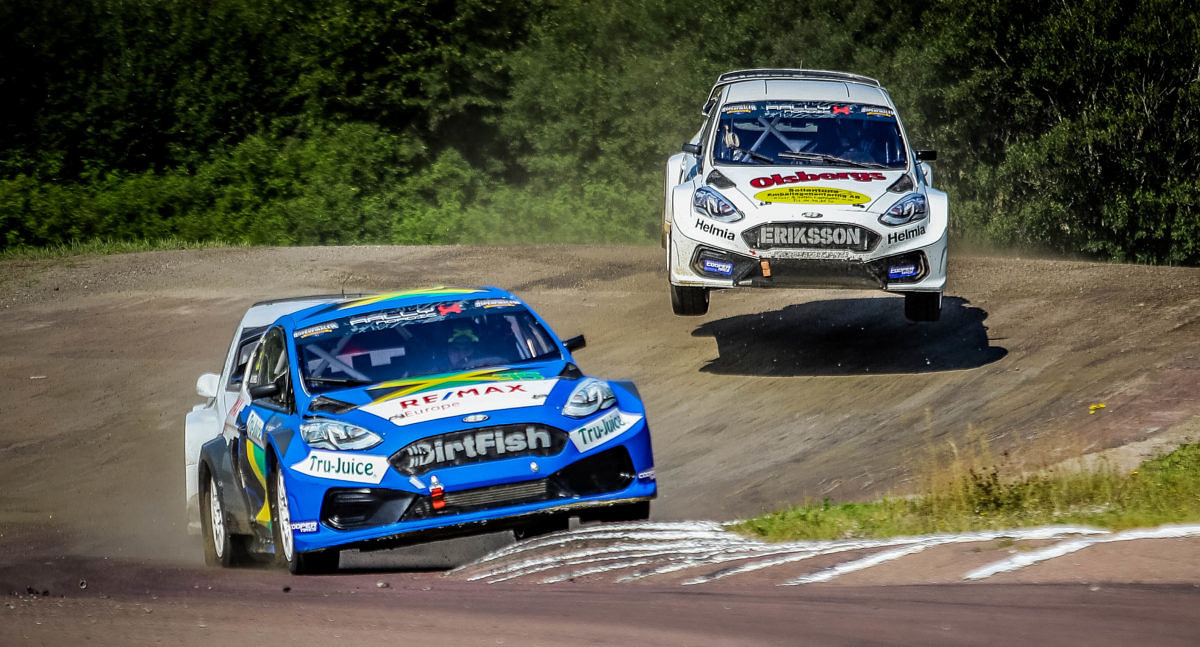 Fellow Supercar rookie Anders Michalak is similarly still in the reckoning, and another driver on the hunt for a big result after being denied a shot at the rostrum last time out through no fault of his own.

In the high-calibre field, there are a number of other entrants who – whilst not in outright championship contention – are primed to spring a surprise. Linus Westman is riding the crest of a wave after finishing a stellar second at Arvika, while Ben-Philip Gundersen – one of the standout performers from Höljes – rejoins the fray for JC Raceteknik and Per Eklund’s comeback continues at the age of 74.

Upholding home honours, finally, will be Ulrik Linnemann and Tobias Daarbak. Linnemann stunned the RallyX Nordic fraternity when he recovered from a disastrous run through the qualifying stages to triumph on his series debut at Nysum two years ago, and he returns behind the wheel of a new Ford Fiesta. Piloting a similar car, Daarbak reached the Euro RX semi-finals last weekend, and as a seven-time Danish CrossCar Champion, the 18-year-old’s potential is clear to see.

Isak Reiersen’s peerless consistency over the opening three rounds of the 2020 RallyX Nordic campaign has carried the Swede to the top of the CrossCar/Crosskart classification arriving at Arvika – but only just, separated from countryman Max Rundberg by a single point at the head of the order.

Competing for JC Raceteknik Juniorteam, Reiersen has not been off the podium all season, whereas Json Motorsport rival Rundberg’s campaign has been characterised more by peaks and troughs, with victory at Höljes followed by an accident in the final at Arvika.

In the new-for-2020 CrossCar Junior category, the five title protagonists – Alex Gustafsson, Raoul Dahlqvist, Erik Andersson, Lukas Andersson and Rasmus Persson – are covered by only ten points, meaning all bets are off, while the SuperNational contenders at Nysum will participate in a special Nations’ Challenge, injecting an extra element of excitement into an event that already has all the ingredients to be a blockbuster affair. Don’t miss it! 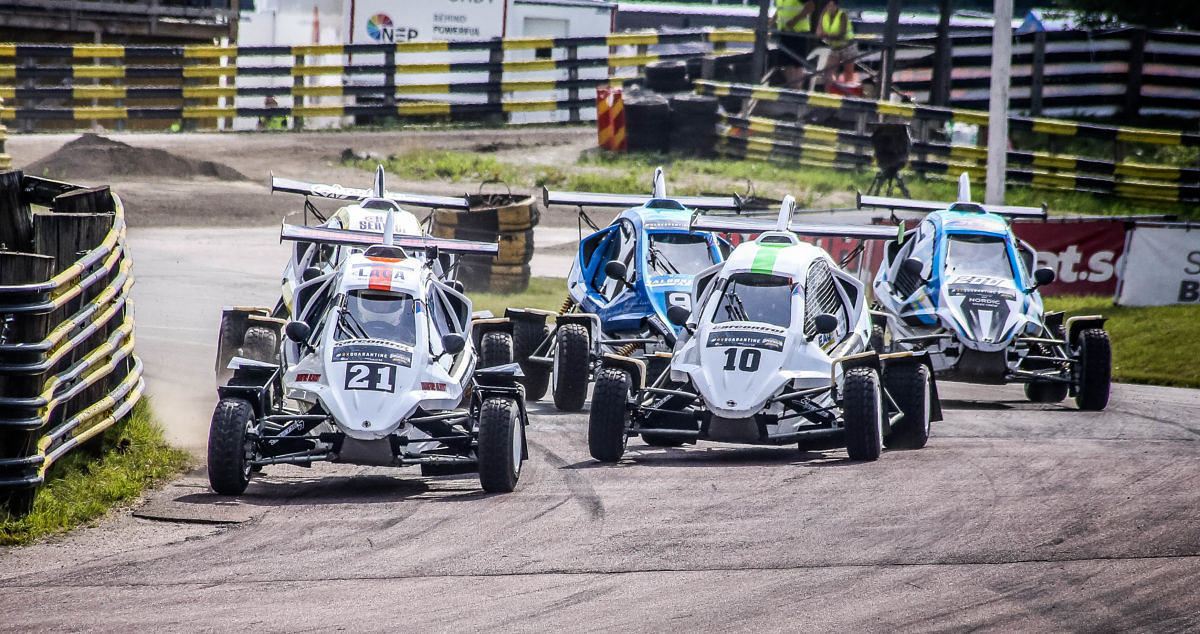